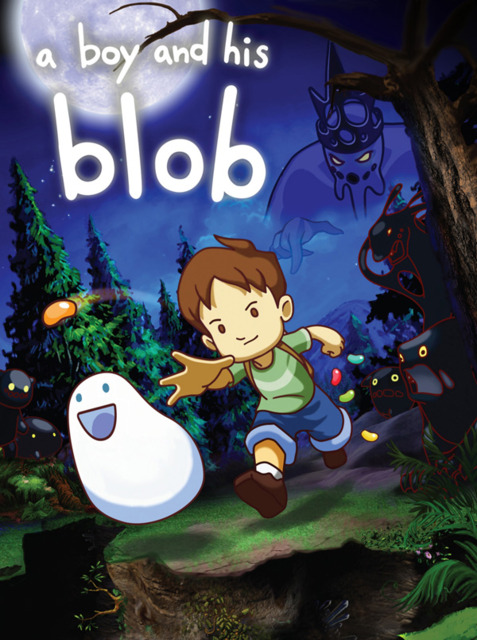 A Boy and His Blob

A Boy and His Blob, a two-dimensional puzzle-platformer has been referred to as "inspired by" and a "rebirth" of the now twenty-year-old original rather than a straightforward remake.

A Boy and His Blob, a remake of the classic puzzle-platformer for the Nintendo Entertainment System, was revealed in Nintendo Power on March 5th, 2009.

The new art style uses hand-painted backgrounds and hand drawn character models, paired with advanced lighting and visual effects. A greater emphasis is also put on the friendship and reliance on one another between the Boy, now with an even younger design, and the Blob (who is not named "Blobert" as in the previous games).

A Virtual Console release of the original  A Boy and His Blob: Trouble on Blobonia has also been rated by the ESRB, assumed to pique interest shortly prior to this full release.

A Boy and His Blob is the brainchild of WayForward Technology's Director, Sean Velasco. Being a fan of the original property, he thought it was an idea which had a lot of potential the team could explore upon the completion of Contra 4. They thought about refinements in gameplay they could take advantage of, coupled with the studio's fresh animation and presentation techniques, and particular strength for two-dimensional platform games. A pitch was made to Majesco Entertainment through Creative Director, Matt Bozon at E3 in 2008.

The series creator, David Crane is said to be with the team "in spirit" whenever they play the original game for reference, but is not involved with the project on a day-to-day basis.

The story starts out with the Blob crash-landing on Earth looking for someone to help him save his beloved home planet of Blobolonia. When The Boy meets the Blob, they begin their quest to dethrone an evil emperor who has taken over the peaceful planet of Blobolonia. Their first task is to travel through a forest on Earth, which contains some enemies which are presumed to be minions of the evil emperor. The pair then travels through a cave near a city, encountering more obstacles. Outside of the cave, the blob transforms into its rocket form and takes the boy to Blobolonia. The two trek through Blobolonia, finding increasingly bleak landscapes as they grow closer to a large castle, which is the center of the emperor's reign. After fighting through the castle, the boy and the blob defeat the emperor, freeing Blobolonia from his dark reign. The blob once again transforms into a rocket, returning the boy to his treehouse. In the nearby forest, the pair encounters a massive monster. After defeating it, the boy and blob part ways in a brief, but heartfelt cutscene. The blob transforms into a rocket to return to Blobolonia, and the boy is left to go on with his life. The story is not delivered through long-winded cutscenes, but rather subtle hints in the context of the world and interactions with characters, leaving a lot to interpretation in the same vein as Half-Life. The ending has been described by the game's Producer, Robb Alvey as "touching".

Like most 2-D puzzle-platformers, A Boy and His Blob has the player travel through various levels by solving puzzles. This is done by feeding Blob a variety of jelly beans. By feeding him these treats, Blob transforms into one of 15 different objects (anvil, trampoline, parachute, etc.), allowing the Boy to get to points he couldn't get to before. When holding down the Nunchuck's C button a radial menu pops with the kinds of jelly beans available. With the wanted bean chosen, the player throws the bean by pressing B. The player may also hold it down to be able to more accurately throw the bean where they want it go. Using the Z button causes the Boy to call for the Blob. This call transforms Blob back into his normal blobby self.

Although the game has many types of beans, not all the jelly beans are available for each level. At the start of the level, the Boy only has the specific kinds of jelly beans that are needed to solve the puzzles. With that said, one level may see the Boy with three beans, while another may see the whole radial menu filled up.

Each stage contains 3 chests that can be found and eaten by blob, and then regurgitated once the duo have returned to the tree house. If you manage to find all 3 in a given stage, then a bonus challenge stage will be unlocked. Upon completion of the bonus stage, concept art or videos will be unlocked for your viewing pleasure. Finding these chests is not required though, only navigating the boy and his blob safely to the end of the level.