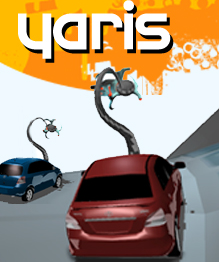 Yaris is an advertisement game made to promote the Toyota Yaris on Xbox Live Arcade. The game was released for free in October of 2007, and was removed completely from the Xbox Live Service on November 4th, 2008, following the expiration of Microsoft's licensing deal with Toyota.

Either alone or with another person, players control a Toyota Yaris car that is equipped with science-fiction weaponry. Players can choose from three different Yaris models, each of which can be customized and upgraded in various ways.

In each of the eight stages, players traverse a series of tubes laden with a variety of non-sequiter enemies and obstacles. These include hovercraft-riding dogs, men on bikes sporting lucha libre masks, and rocket-powered toasters.

Yaris received mostly negative reviews, gaining a score of seventeen out of a hundred on Metacritic.com. Critics cited poor gameplay mechanics and lackluster graphics and level design as key issues with the game.

Mike Flacy of Video Game Talk wrote "As the title is completely free, you should ask yourself different questions related to value. For instance, “Is the title worth the 17.5 seconds it will take to download it?” That’s a tough one. You could take out the trash in that amount of time, a much more rewarding task than playing Yaris."

In Games Radar's review of Yaris, Greg Sewart said "Unfortunately, there are actually no redeeming qualities to Yaris.'