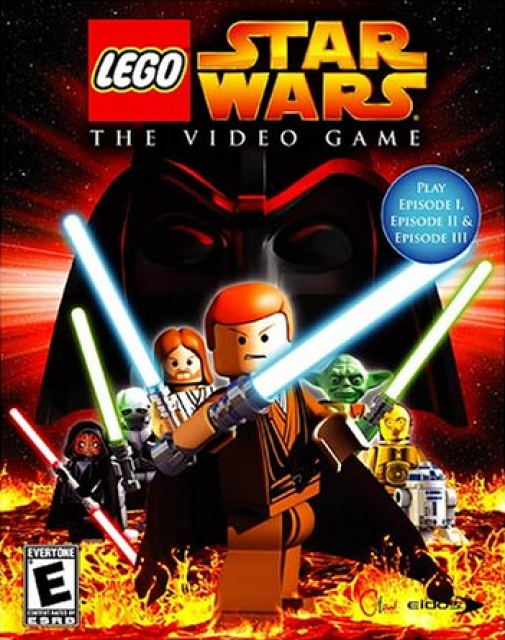 LEGO Star Wars: The Video Game is a third-person sci-fi fantasy action-adventure game developed by Traveller's Tales (in-game as TT Games) and published by Eidos (in conjunction with Giant Interactive and LucasArts) for the PlayStation 2, Xbox, and PC in April 2-5 2005. It was later ported to the Mac (by Aspyr) on August 23, 2005 and to the GameCube on October 25, 2005.

Based on the LEGO Star Wars line of licensed LEGO toys, LEGO Star Wars is a video game adaptation of the Star Wars film franchise's "prequel trilogy" (the last of which was unreleased at the time). All characters are presented as mute LEGO minifigures, with the game's architecture and vehicles presented as LEGO bricks and components. With no voice acting of any kind, the game shows the story in a simplistic (and often comical) form.

As the game is geared towards family-friendly play, the game uses simplistic hack-and-slash action (with support for two-player co-operative gameplay), with players manipulating the environment (using the Force) and switching between characters to solve puzzles. Throughout the game, players collect LEGO Studs, which can be used to purchase bonus content (including new characters for use in "Free Play" mode). The game does not make use of a lives system (and thus there are no Game Over scenarios), with each "death" causing the player to lose some Studs. In addition, the game features occasional vehicular sequences (such as podracing and space combat).

Along with numerous sequels, Traveller's Tales made numerous games with the LEGO franchise (particularly with licensed games, including LEGO Batman, LEGO Marvel, LEGO Lord of the Rings, and LEGO Harry Potter). Most of these games use a similar action-adventure gameplay. An enhanced version of the game, combined with LEGO Star Wars II: The Original Trilogy, was released in 2007 as LEGO Star Wars: The Complete Saga.

The game also received a handheld version for the Game Boy Advance, developed by Griptonite and published on March 29, 2005. Unlike the main game, this version is played in isometric perspective.

Mechanically, the game is an extremely simple hack and slash game presented in three dimensional levels, with light platforming elements. There are fifty-six playable characters in the game, (most of which are only playable in the Free Play mode), however they are all divided into four archetypes - Jedi, Blaster, Super Jump, Droid. Jedi characters can use the force to solve some simplistic puzzles and deflect enemy blaster fire; Blaster characters can shoot enemies with their blaster and possess a grappling hook; Super jump characters possess the ability to jump much higher than other characters, and droid characters do not get intentionally fired at by enemies, whilst possessing the ability to unlock certain doors.

As players progress through the " Story Mode", they recap the events of the New Star Wars Trilogy. This consists mainly of the Hack and Slash/Platforming gameplay, with occasional vehicular sections (for example, the large space battle featured in the opening to Episode III) breaking up the action. After a scenario has been completed, the player may enter this scenario in "free play" mode, which allows them to select any character for use in any stage of the game, including secret characters that have been unlocked. This allows various character special abilities to be used, opening the way to various secret areas not available in the story mode.

As the game goes on, players accumulate "studs", the currency in the game. These may be traded in the "Diner" (hub world) of the game for bonus content, including playable characters.

Episode I: The Phantom Menace

Episode II: Attack of the Clones

Episode III: Revenge of the Sith

The game includes 56 playable characters (only 25 of which are playable in Story Mode). Those played in Story Mode are unlocked (if not already unlocked) for use in Free Play once that mission ends.

The ship models used in the game were created out of virtual versions of single separately built Lego bricks. The developer Traveller’s Tales essentially turned Maya into an infinitely large Lego kit: “Slave-1, to build, is an afternoon. Building a new spaceship out of regular polygons would take a whole lot longer.”

The cutscenes were originally animated in a Lego stop-motion style (similar to the internet videos of the same styling) with the characters being created as plastic mini figures within the game. This was eventually changed during development due to the restrictions created on the characters being represented in such a way.