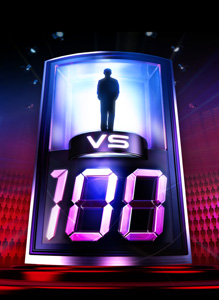 Can one Xbox Avatar outlast a mob of 100 other Avatars in trivia? Compete against other players (as either The One, one of The Mob, or a bystander in The Crowd) on Xbox Live in this interactive trivia game based on the TV game show.
Xbox 360 Games Store

1 vs. 100 (not to be confused with the Nintendo DS game of the same name) was a downloadable massively-multiplayer online interactive quiz show developed and released by Microsoft for the Xbox 360 (via the Xbox Live Marketplace). The game is currently discontinued and cannot be played.

Based on the television quiz show of the same name, players (as their Avatars) join in at specific dates and times and participate to win actual prizes (including Microsoft Points and Xbox Live Arcade games). It was the first and only game to make use of the Xbox Live Primetime service (and is considered the predecessor to the "Texas Heat" mode of Full House Poker).

Each two-hour show was hosted live by either Chris Cashman (in North America) or James McCourt (in the United Kingdom). During the show, one player ("The One") must answer consecutive trivia questions correctly while attempting to eliminate players from a group of 100 ("The Mob", who must also answer the same questions correctly). The rest of the players, "The Crowd", play the game as bystanders (answering questions while gaining points). The top players of The Crowd can be chosen as The One or one of the members of The Mob for the next round.

The game was free to all Xbox Live Gold subscribers and is ad-supported (through 15-30 second ad breaks). The biweekly show lasted for two Seasons, each Season lasting 13 weeks. A 30-minute show, titled Extended Play, also ran during the second Season, in which all players compete against each other as one giant Mob. (No prizes were given, though top players were given the chance of becoming The One or part of The Mob on the next live game). The first episode of Season 1 started as a beta on June 1, 2009. Season 2, which added achievements, Extended Play sessions, and experience levels (allowing players to gain new dance moves) started on November 19, 2009. The game can no longer be played due to being discontinued.

Gameplay started with a short set up period where The One and The Mob were randomly chosen. Players were then placed in their areas. The One was placed center stage next to the co-host. The 100 members of the Mob were aligned inside squares in horizontal ascending rows in front of The One. The Audience was placed into groups of four in the spectator seats where they competed with each other for score, as well as for a higher chance at being picked as a contestant in the show. Entries were based on a rotating system based on season score, weekly score, and previous round score.

Once the game started, everyone was given short amounts of time to answer multiple choice trivia questions in a variety of subjects. It was the goal of both The One and The Mob to outlast each other by answering questions correctly. One wrong answer would eliminate The One and each member of The Mob that incorrectly answered the question. As each member of The Mob was eliminated the value of the current Microsoft Point prize increased. It increased for every 10 Mob members eliminated up to a cap of 10,000 for the top prize. If The One outlasted every single member of The Mob, they were awarded the top prize and The Mob got nothing. If The One incorrectly answered a question, he or she was eliminated and received nothing. If this happened, the top three scoring members of The Mob won a XBOX Live Arcade game download code. At predetermined times, The One could also choose to take the current prize and leave, thus ending the current game and awarding the Mob nothing. When either side was eliminated or The One chose to keep the money, a new One and Mob was chosen from The Crowd. This was done after a short break where current gameplay stats, scores, leaderboards, and advertisements were shown. At various times during the game, the host would provide commentary on the current game in varying ways.

You did not have to be present at the start of a 2 hour live block. You could jump in or out at any time and participate in individual rounds.

The One was given a variety of "Helps" or special options that they could use one time each that could either help or hurt them should they of chosen to use one during a question. These helps included "Trust the Top 10" (Originally "Trust the Brain") , "Trust the Mob", and "Trust the Crowd". Trust the Mob was an option that let The One decide not to answer a question themselves and instead go along with whatever answer the majority of The Mob chose, Trust the Top 10 chose the answer that the top 10 players had chosen (In Season 1, the answer was only taken from the top player, this was then changed for balance issues), and Trust the Crowd chose the answer that the majority of the crowd has chose. This could obviously either help or hurt depending on if the chosen target had answered the question right or wrong.

Extended Play was a daily version of 1 vs 100 that was not hosted live and ran in 30 minute episodes. It was usually General Trivia except for Special Featured Episodes that usually took place at the very end or towards the end of a set of episodes. Extended Play worked exactly as a Live episode with minor exceptions. In Extended Play every Player was placed in the Mob and there was no One present. Instead of competing against the One, players instead tried to secure the top score of everyone playing as well as their 4 player party. There was a total of 37 questions in every 30 minute Episode. Exclusive to Extended Play was the earning and use of "Skips". A player earned a skip for every 3 consecutive correct answers and could hold up to three Skips total. When a player used a skip they chose to skip a question instead of answering it. This allows them to keep their streak bonus intact, however they would not earn any points for that question. This play also included periodic bonus questions with a times 2 multiplier, with the exception of the final being that of a times 3.

Featured Extended Play Episodes were special episodes that hold questions all part of a select theme and aired on a weekly basis, typically with an hour to hour and a half long block.During Season 2 there were 5 different Featured Episodes, they were:

At the end of each round, players were given awards based on their performance. These awards, along with statistics recapping your best round and weekly record, could be accessed at any time by holding right trigger.