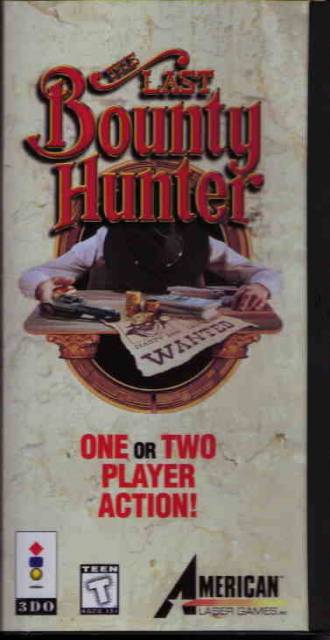 The Last Bounty Hunter is an arcade light gun shooter that was developed by American Laser Games. The Last Bounty Hunter is very similar to Mad Dog McCree in that the game shows various FMV scenes in which the player shoots at the actors. It is the last of this style of game produced by American Laser Games before they moved into creating home titles targeted at a female demographic and rebranded themselves as Her Interactive.

The game features four different outlaws the player can take in either dead or alive: Handsome Harry, Nasty Dan, The Cactus Kid, and El Loco. The player hunts the outlaws in the order they choose. Many of the scenes in the game are randomized and not all scenes appear in each playthrough. There are also variations in the ending depending on how many outlaws are captured instead of killed. Capturing the outlaws usually requires shooting the gun out of their hand.

The original arcade version features an integrated scoreboard at the beginning of the game. While the 3DO, CD-i, and PC ports from the 90s retain the player score, this scoreboard feature is removed from the game. The DOS version is also missing a few scenes that were omitted due to disc space and video compression limitations. The Wii version, contained in the Mad Dog McCree Gunslinger Pack, contains all the scenes and restores the scoreboard function, making it the most accurate home port of the game to date.