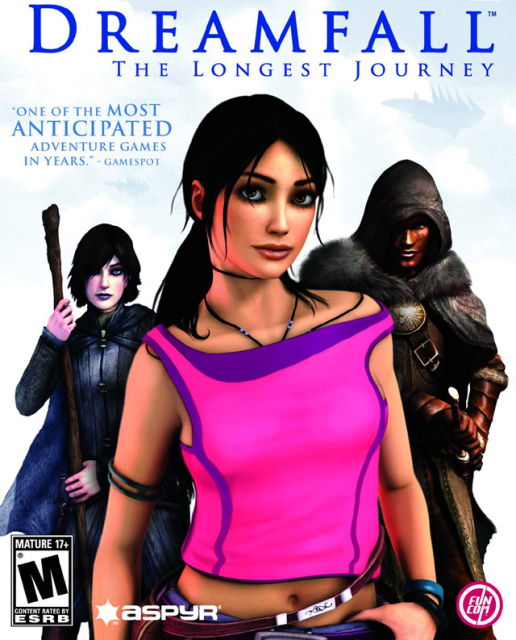 Funcom's long-awaited follow-up to the point-and-click adventure, The Longest Journey. Dreamfall depicts three unique characters who live apparently disparate lives, but whose stories are intertwined, along with the fate of two worlds.

Dreamfall: The Longest Journey is a 2006 adventure game developed by Funcom as a direct sequel to the 2000 game The Longest Journey. It was simultaneously released for the PC and Xbox, appears on the Xbox 360 backwards compatibility list, and is currently available for download on the 360 through Microsoft's "Xbox Originals" program. It was also added to the GOG and Steam digital distribution storefronts. Dreamfall features many returning characters from the original game, as well as a full cast of new ones, who allow the player to experience the story through fresh eyes and different points of view.

Unlike its predecessor, which was a point-and-click adventure game in the vein of Sierra's classic King's Quest or Leisure Suit Larry games, Dreamfall is a fully 3D game which eschews dense puzzle solving in favor of exploration, combat and stealth sequences. The main character is controlled from a third-person perspective with access to automatic quest logs and a basic inventory system which allows the player to combine and use items from the environment to solve basic puzzles. Combat is simplistic, with buttons for quick or strong attacks and no combo system to speak of. The stealth mechanics are similarly rudimentary, but like the combat portions, are also infrequent, brief, and forgiving.

Most of Dreamfall's gameplay actually centers on simply moving from one point to another, examining elements of the environment along the way, and experiencing the dialogue-based storytelling.

Dreamfall is a traditional adventure game at heart, with the player controlling three different characters - Zoë, Kian, and April (and briefly a fourth, Brian Westhouse, during the game's intro) - and moving them around all sorts of fantasy-themed or otherworldly areas. The current player character talks to people, choosing topics and collecting information about what to do next. They'll also collect a fair amount of items throughout their journeys that they'll need to present to others or combine into new items in order to progress. Kian's chapters are the exception, as all his sequences are purely story-driven.

In addition to chatting and exploring the environment, a hacking minigame where the player will need to match up symbols on a board in a short amount of time also plays a role in several sequences in the game in which a character must break and enter into a location to get the required information to move forward in the plot.

There is a very simple combat system at play in the game, too, although fighting takes up maybe 20 minutes or so of the entire experience. Two attack buttons and a block button are available, with a character able to target one enemy at a time. Health bars are displayed for both parties, and if the player's character perishes, the player will start over from the beginning of the fight. Likewise, the stealth sequences, if failed, will simply drop the player off at one of the frequent checkpoints.

In The Longest Journey, protagonist April Ryan discovered that the Earth she grew up in, the world governed by the laws of science and physics, is only one half of a complete whole.

Another Earth exists, parallel to her own, in which humans and mythological creatures can use magic and alchemy to affect their reality. A delicate Balance maintains the separation between these alternate realities, and when April is discovered to have the latent ability to shift between the two dimensions, she is swept up in a quest to preserve that balance and save both Earths.

Her victory is a narrow one, and for a brief time, chaos enveloped both realms. Stark, the world of logic and technology, suffered a great Collapse where virtually all existing electronics simply ceased to function. Communication with all extraterrestrial colonies was suddenly and permanently severed, and societies crumbled as the infrastructure around them was rendered useless. In the world of magic and fantasy the chaos took on a more literal form: a great black cloud which triggered a great upheaval among the indigenous people. The great capital city of which April visited is nearly conquered by a great invading army of the Tyren, but they are finally beaten back when the Azadi arrive from the distant Southlands to liberate the Marcurian people.

Dreamfall picks up ten years later, in year 2219, when both worlds still bear the scars from those events. Believing itself to be the victim of a cataclysmic terrorist attack, Stark has been unified under a single global agency called simply the Syndicate which continuously regulates an omnipresent wireless signal linking every electronic device on the planet. This vast network is known as the Wire, and the relentless surveillance of the global population has inspired a burgeoning black market for phones and PDAs which can operate apart from the main grid.

Meanwhile, in the magical world of Arcadia, the Azadi who liberated Marcuria from the barbaric Tyren have become the new occupying force, dedicated to converting the human population with their own religious beliefs while segregating the non-human inhabitants into ghettos. This has provoked an active, but limited resistance to spring up in the surrounding areas, using guerrilla-style tactics to disrupt Azadi supply caravans while quietly trying to garner more support among the docile masses in the city.

The game includes three alternating protagonists: Zoë Castillo, a melancholy college drop-out in Stark who sets out to find a dear friend who disappeared in the middle of a journalistic investigation; April Ryan, the disillusioned heroine from the first game who has permanently settled in Arcadia as a leader of the Resistance; and Kian Alvane, an elite Azadi warrior newly assigned to Marcuria to stamp out the Resistance once and for all. Player control automatically switches between these characters as their disparate plot lines unfold, and before the end, they’ll discover that their interwoven quests have uncovered a new danger which threatens both worlds.

Unlike The Longest Journey which told a single, complete tale from beginning to end, Dreamfall was designed and written as the first part of a two-part story. This leaves many major plot elements unresolved by the end of the game, which long-time fans are hoping will be answered in the presently-ongoing episodic Dreamfall: Chapters. It remains unclear when the story might be brought to a close.

The soundtrack to Dreamfall: The Longest Journey was composed primarily by Leon Willett and released in the United States on June 2nd, 2006.