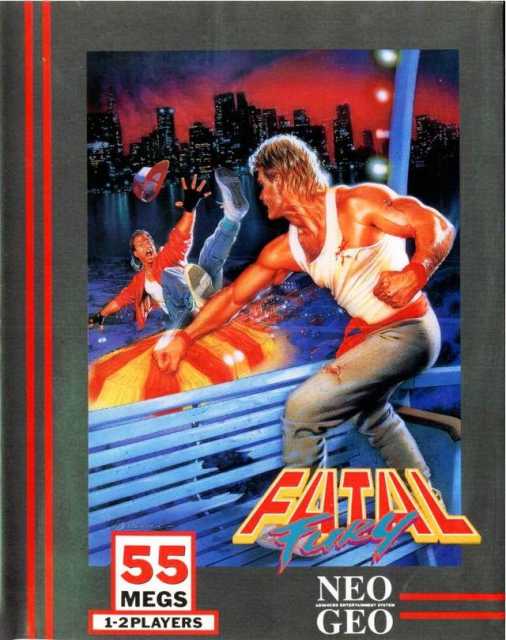 Fatal Fury (also known as Fatal Fury: King of Fighters, and known in Japan as Garou Densetsu: Shukumei no Tatakai, which loosely translates to "Legend of the Hungry Wolf: The Battle of Destiny") is a 2D fighting game developed and released by SNK for arcades (using the Neo Geo MVS hardware) and the Neo Geo AES on December 20, 1991.

The first fighting game released for the Neo Geo (and the first fighting game developed by SNK), Fatal Fury was designed as a spiritual successor to the original Street Fighter (by its creator, Takashi Nishiyama). Developed around the same time as Street Fighter II (and released a half a year later), Fatal Fury introduced a special "dual line" system (where most stages allow players to fight between the foreground and the background areas). It also introduced the concept of team fights (as a second player joining in must help the first player defeat their opponent before the versus match begins) and mid-match stage changes (changing either the time of day or the weather). The game would later receive numerous sequels throughout the Neo Geo's life cycle.

Set in the fictional American city of South Town, Fatal Fury follows American martial artist Terry Bogard, his younger Ninjitsu brother Andy Bogard, and their Japanese Muay Thai kick boxer friend Joe Higashi as they enter the "King of Fighters" tournament (which is not to be confused with the tournaments in the King of Fighters game series) to seek revenge on its sponsor: underworld crime boss Geese Howard.

The game was ported to the Super Nintendo Entertainment System (removing the dual line system, team fights, and bonus rounds) and the Genesis (removing two opponents) during 1993, both by Takara. These ports made the other characters playable but removed or changed some of the other features (both versions removing the standard bonus rounds and team fights, the SNES version removing the dual line system, and the Genesis version removing some opponents) Other ports during that era include the Sharp X68000 (on May 21, 1993 for Japan only) and the Neo Geo CD (by SNK on September 9, 1994). The original version was also included in two compilations: Fatal Fury: Battle Archives Volume 1 (for the PlayStation 2) and SNK Arcade Classics Volume 1 (for the PlayStation 2, PlayStation Portable, and Wii) compilations, and was digitally released for the Wii (via the Virtual Console on September 21, 2007), PlayStation 3, and PlayStation Portable (both via PlayStation Network on December 21, 2010, later made available for the PlayStation Vita).

Fatal Fury plays like a traditional fighting game. The player has three attack buttons: Punch, Kick, and Throw. Each character have special moves whose input commands are shown during the course of the game (after every bonus round) as opposed to being given in an instruction card in the game's cabinet.

The game introduced a unique and novel fighting game concept to the franchise: that fighters can fight on two different areas (known as "lines" or "planes") instead of just one. This allows characters to dodge attacks and projectiles completely rather than block them. While this was heavily expanded in later games, this game does not allow the player character to freely move among the lines. Instead, the player character can knock the opponent to the other area and follow up with a quick roll or a jump kick. Some stages have only one area, with the other area blocked off by obstacles (in which knocking the opponent into the obstacles bounce them back to the main area).

After every two matches, the player is allowed to participate in a bonus round in which they arm wrestle a machine by mashing the Punch button as fast as possible.

Fatal Fury is the only fighting game in the series where if a second player joins in the middle of a fight, the fight is not interrupted so that the two players could battle. Instead, before the actual versus battle takes place, both players fight the CPU opponent in a two-on-one fight.

Despite there being 11 total fighters in this fighting game, only three are playable in the arcade version. The other fighters are only playable on the SNES and Genesis ports in their Versus Modes only (although the SNES version only allowed the second player to play as the other players).

Hwa Jai and Billy Kane are not included as fighters in the Genesis port. Instead, the matches against the second and fourth initial opponents in the campaign are first "interrupted" with match against one of the other remaining protagonists.

After initially choosing one of the three protagonists, players must then choose their first opponent to fight:

Then, after winning the tournament, the players' characters are kidnapped and forced to fight the final boss: underworld crime boss Geese Howard.