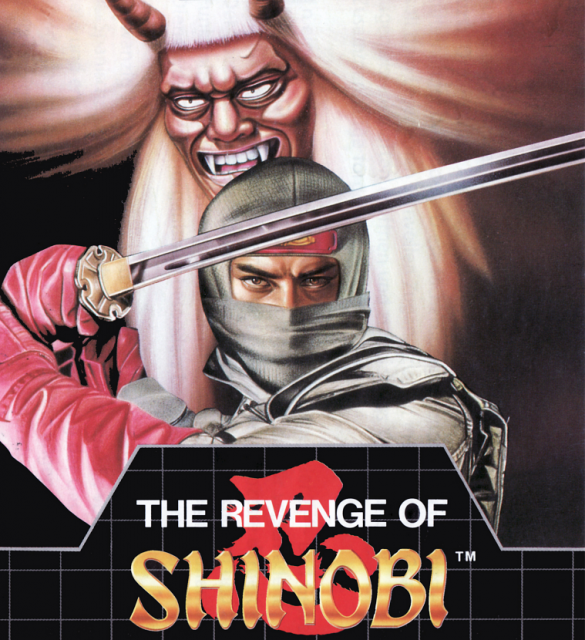 The Revenge of Shinobi

Often considered the franchise's pinnacle, The Revenge of Shinobi features a wide variety of locations, and a soundtrack by Yuzo Koshiro of Streets of Rage fame. In early versions, it also featured bosses who bore a striking resemblance to characters not owned by Sega.

The Revenge of Shinobi (JP: The Super Shinobi) is a ninja action game from Sega and part of their Shinobi franchise, released exclusively for their fledgling Genesis console in 1989. The opposing ninja clan from the original Shinobi, Zeed, has returned as Neo Zeed. They seek revenge on Joe Musashi, wiping out his clan and kidnapping his fiancée.

The game is a 2D side-scrolling brawler. Joe is armed with shuriken (though they resemble kunai) for distance attacks and ninja magic to handle difficult bosses. He is armed with the Ninjitsu, or quite simply, Ninja Magic. The game consists of differing difficulty levels, with the higher difficulty levels having more enemies, less ability to handle damage, and fewer lives to start with.

Special techniques that the player can use that can cause massive damage, increase mobility, and provide invulnerability.

Ikazuchi, the Art of Thunder

Joe calls upon Thunder to surround him with its protection. While enveloped in Ikazuchi, Joe will not be injured and his Life Bar won't decrease. After taking several enemy hits, Ikazuchi fades away.

Kariu, the Art of the Fire Dragon

Assume this jitsu to envelop Joe in a fire column, which then spits and travels, scorching every enemy it touches. Kariu is over when the fire columns disappear.

Fushin, the Art of Floating

Increase Joe's jumping prowess with this jitsu. When Joe assumes Fushin, his jumps and somersaults have maximum height and distance. Fushin stays with Joe until the scene ends, even if he assumes another jitsu.

Mijin, the Art of Pulverizing

By assuming Mijin Joe becomes a human explosion that destroys everything in its blast. Mijin is best used as a desperate last resort, when the life bar is short. Mihin takes a life, so the player must make sure they have at least one other life remaining.

Inside crates the player will find a variety of items that can both help or hinder their progress.

The Revenge of Shinobi has some infamous instances of copyright infringement. The game had bosses who very closely resembled Spider-Man, Batman, Godzilla and The Terminator. All Bosses were altered or replaced in later versions of the game: In version 1.01 Batman was replaced by a bat-like mutant, in 1.02 Spiderman is re-designed to look more like the character (because Sega was developing The Amazing Spider-Man vs. The Kingpin for the Genesis at the time) also the bat creature is removed from the battle entirely, and in 1.03 Godzilla is replaced by a skeletal dinosaur. The copyright issues have been a major reason why the game is not often included in Sega compilation discs. The Virtual Console version has a totally unique version where Spider-Man had a palette swap, but identical abilities (this is due to the license for using Spider-Man was for only limited time, that license is now owned by Activision).

As part of the SEGA AGES Online initiative, the game hit Xbox Live Marketplace and PlayStation Network on May 23rd 2012 in Japan (by its Japanese title, The Super Shinobi). For the PlayStation 3, the title was released for ¥600. For the Xbox 360, the title was released in a bundle with Alex Kidd in Miracle World and Super Hang-On for 800 MS Points.