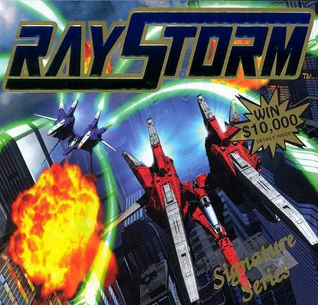 Vertical shoot 'em up from Taito and Working Designs and sequel to RayForce/Galactic Attack.

RayStorm was released in Japanese arcades in 1996 but was released in the United States on the PlayStation later that same year. RayStorm was developed by Taito Corporation and published by Working Designs, though Taito published the game themselves in Japan. The next year, the game was ported to the Sega Saturn in Japan, oddly renamed Layer Section II, where the publishing was taken over by Mediaquest. Due to its re-naming, the Sega Saturn port is much less-known than the arcade and PlayStation version. In 2001, RayStorm was ported to Windows in Japan, published by CyberFront Corporation. RayStorm is seen by many as the spiritual successor immensely popular Galactic Attack, or RayForce as it is known in Japan.

On May 5th 2010 Raystorm was released on Xbox live as Raystorm HD with uprezzed textures, improved lighting, some polygon changes and some better particle effects.