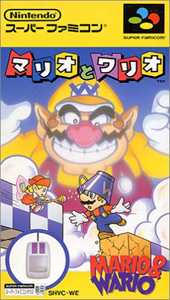 Mario & Wario was released on the Super Famicom on August 27, 1993. It was developed by Game Freak and published by Nintendo. It is notable that this game used the SNES Mouse. Despite the game only being released in Japan, it is completely in English. Players use the SNES Mouse to guide Mario around a level, avoiding various obstacles along the way.

Players use the SNES Mouse to play as Wanda, a fairy. Wanda guides Mario while he has various objects over his head (placed there by Wario). If Wanda can guide Mario to the end of the level, Luigi will remove the item from his head. Wanda can also guide Princess Peach and Yoshi, but the only difference is their walking speed. By clicking on things with the SNES Mouse, certain things happen. Wanda can destroy enemies and obstacles, change Mario's direction, and do other things to affect the environment. At the end of each world, Wanda must fight Wario in his plane.