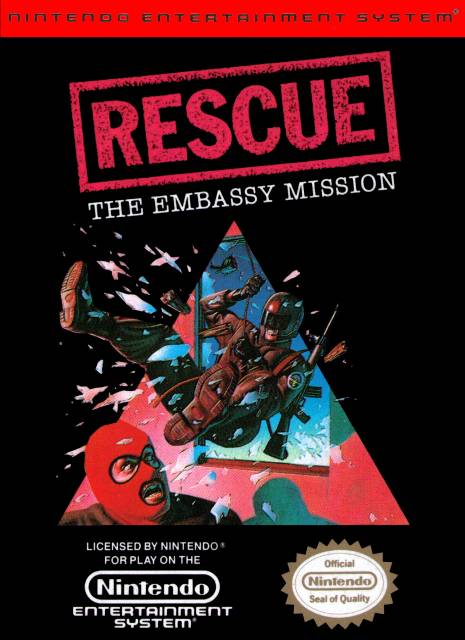 Also known as Hostages, this tactical action game uses stealth, sharpshooting, rappelling and FPS sequences in a mission to save an embassy from terrorist invaders.

Rescue: The Embassy Mission/Hostages is a computer and NES game from 1988/89, involving four different types of gameplay segments as the player attempts to rescue hostages and eliminate the terrorist threat.

Infogrames (later Atari SA) created the original version of the game for various European and North American home computers. The game was adapted for the NES by Kemco, which gave it its new name Rescue: The Embassy Mission for its Europe and North American releases. In Japan, the NES game retained the game's original name of Hostages.

The game is known for its short sessions and replayability. Once the player has gotten used to the game's "stages", they can attempt the same missions again on higher difficulty levels.

In the opening cutscene, terrorists take an embassy hostage. The player controls 6 SWAT team members infiltrating the embassy to rescue the hostages within. The player sets two separate difficulties (dubbed Rank and Mission), determining variables such as enemy reaction time and the presence of innocents who can be injured by the actions of the player. Regardless of the settings, the goals of the story and geometry of the levels remain the same.

The player starts controlling the three snipers on the team. In the first segment, the player must maneuver the individual snipers to the entrances of the buildings surrounding the embassy to take up their sniper posts. The first sniper must make it to the closest sniper post, the second the middle point and the third to the farthest point. If a sniper is killed during this segment, the next sniper attempts to make it to his sniper post, with the last sniper point becoming unavailable to the player. To reach the points, the player must avoid the terrorist’s searchlights. The player can roll, go prone and crawl or take cover in doorways, windows and other objects to avoid being spotted.

Once the snipers are in position, the player can take control of the snipers again. The perspective switches from side-scrolling to through the sniper’s scope. The player can eliminate terrorists who happen to be near the windows. Reducing the number of terrorists inside the Embassy makes later gameplay segments easier. Each of the three sniper points have a vantage point on a different side of the embassy.

In the third gameplay segment the player takes control of the assault team, who have been dropped off on the roof by a helicopter. Individually the three assault team members must rappel down the side of the embassy and enter through a window. The player can enter on any of the three floors. The player taps alternate keys to carefully descend. If the player descends too far without catching the rope, the team member will fall and die. If the player encounters a silhouette in the window and crosses that window, the rope will be cut by that terrorist. These silhouettes are the terrorists that can be eliminated by the sniper, the player can switch to the sniper at any time to eliminate a suddenly appearing enemy before crossing that window. When the player reaches the desired floor, they can then break through the window.

The final gameplay segment is in the first-person view. Individually the assault team members make their way through the three floors of the building, eliminating the terrorists. Movement is handled through screens. The player can better understand the character’s position through a mini-map. In certain difficulty settings, the hostages will appear in the map and can be shot by the assault team. At lower difficulties, everyone (terrorists and hostages) appear on the mini-map. The game ends when all terrorists are eliminated.

On most difficulty settings, the player views an ending cutscene rating the player’s performance in the mission. The number of hostages and team members who survived are tallied and a newspaper article detailing the casualties is displayed.