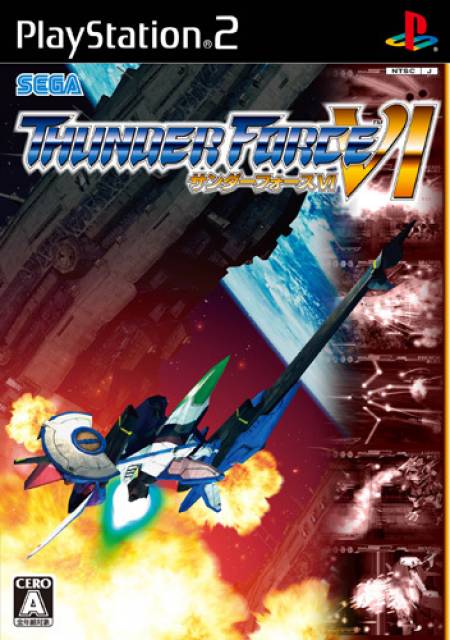 The next installment in the Thunder Force series. The game brings the classic scrolling shooter action to the Playstation 2.
PlayStation 2

Thunder Force VI is a side-scrolling shooter utilizing 3D artwork for both its effects, environments, and enemies. The player starts off with a default ship to play through the game with, although two additional ships can be unlocked for additional replayability. In addition to new ships, several difficulty levels, an option to raise or reduce the number of extra lives, and select which three stages to play through, Thunder Force VI manages to follow the same formula set by its predecessors.

At this moment, Thunder Force VI is available only in Japan with no stated plans on whether it will be released elsewhere. However, this hasn't stopped enthusiasts from importing the game and enjoying it thanks to the straightforward controls, especially if they have come in from Thunder Force V. The two games are very similar to each other, although the gameplay formula has undergone a few changes.

Unlike many shooters, Thunder Force VI actually has an extensive backstory that is explained through the elaborate ending that follows as well as on the official website. This is a tradition that has also been noted with Thunder Force V within the dossier reports that are unlocked during gameplay.

Thunder Force VI game takes place ten years following the events of Thunder Force V when a new enemy arrives from space, laying siege to Earth and its colonies. As was explained in Thunder Force V, the Vasteel technology that was discovered and then used by both its antagonist, the Guardian, and the player was actually developed by an alien civilization called the Galactic Federation. It was initially made to fight the Orn Empire, the same empire whose forces have finally arrived at Earth.

With no other choice, the scientists once again restart the Vasteel project in a last ditch effort to stop Orn before it can destroy the Earth and create the RVR-00 Phoenix as their last hope.

Each ship that the player can use in the game employ a number of weapons that can be earned during gameplay and switched on the fly to adjust to the different situations that may arise. Each ship can equip five different weapons, although only four of these are similar across each of the three selectable ships.

The weapons used in the game are similar to those used in Thunder Force V with a few new tweaks depending on the ship being used.

A new option, Over Weapon, causes the currently used weapon to energize itself and become a special attack once its power-up gauge has been filled at least one time via special orbs. Additional bars can be stocked for a total of six.

The weapons used in the game are: