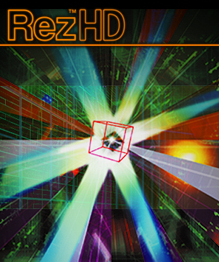 Rez HD is an enhanced port of Rez, released through Xbox Live Arcade on January 30th 2008. The game was first announced by Tetsuya Mizuguchi in September 2007, at the Tokyo Game Show in Japan. The port was handled by Hexa Drive. A retail release was also released for Rez HD as part of a compilation called Qubed with Lumines Live! and Every Extend Extra Extreme as well with Atari handling the publishing duties.

Changes from the original versions

The discerning player will be able to spot small differences in audio when comparing the original versions to Rez HD. For example, the hit sound for enemies of the type TX in Area 01 was changed to be a half tone higher in pitch, thus altering the harmony for certain section of the level (YouTube demonstration). Furthermore, some music samples on the Area 01 boss are inconsistent in volume. It is unknown if the developers have made these changes intentionally or if they actually result from bugs.

The story is that of an AI that governs the world's networks, known as Eden. The AI perpetually gathers up all the knowledge in the world, until one day, becoming self-aware, shuts herself down, crippling the outside world. The player plays as a nameless hacker, attempting to break through her self-imposed firewalls and reboot the system. Each level represents an ancient society, be it Greece, Egypt, or Mesopotamia. The final level, Area 5, is the story of evolution of life, told through small text blurbs in between each segment.

The core gameplay in Rez involves moving an on-screen reticule over targets and locking-on to them by holding down the fire button. When the button is released, up to eight homing shots can be released to eliminate enemies. The player also has a limited number of smart bombs that turns on automatic fire to eliminate most nearby enemies for a brief period of time. However, what sets this game apart from all others of its ilk is that with every lock on, every shot fired, and every missile deployed, a sound is made that is tonally aligned with the music and synced up with the beat. This creates the effect of the user essentially improvising the song as they play. Each level contains 10 "layers", each with an evolved version of the music, so the songs build up in a crescendo, always climaxing with the boss fights. Every action you make in this game, whether it be shooting an enemy, picking up a power-up, or simply progressing to the next stage, has an aural component to it, which, when taken together with the background music and visual spectacle, creates a very unique pseudo-rhythm-game feel.

Scoring in Rez centers entirely around multipliers based on the number of lock-ons a player has. For example, firing single shots nets no multiplier, while locking on to four objects nets a 4x multiplier. Higher level players memorize enemy patterns and try to get 8x multipliers as frequently as possible, as well as figure out tricks to milk the bosses for as many lock-ons as possible.

The key to achieving the highest scores in Rez HD is to not only shoot down the enemies themselves, but also their projectiles. A great Rez player will wait for all enemies to launch their attacks before targeting them all at the same time for the highest multiplier.

The end boss fights also alter depending on how well you do. The better you do within each stage, the harder (or easier) the end bosses are. You can tell how difficult the end boss is by the suffix that appears, such as 'Tera' or 'Giga'. The form of the end boss is determined by your shot down rate %.

The in-game soundtrack contains edited versions of various electronic music compositions. Note that the songs appear in remixed form on the official soundtrack, entitled "Rez: Gamer's Guide To..." Also, the version of Adam Freeland's "Fear" contained in-game is the only mix of that song to contain those specific elements and that particular musical arrangement.

Beyond mode is a set of additional challenges, bonus stages, and modes.

Lost Area is a mission on a long forgotten and unused section of the network; it is rather challenging compared to Rez's normal levels and features music by Ebz.

Trance MIssion is visual and audio overload, the level never ends, and there is no danger to the player.

In Boss Rush you play all 5 bosses in order.