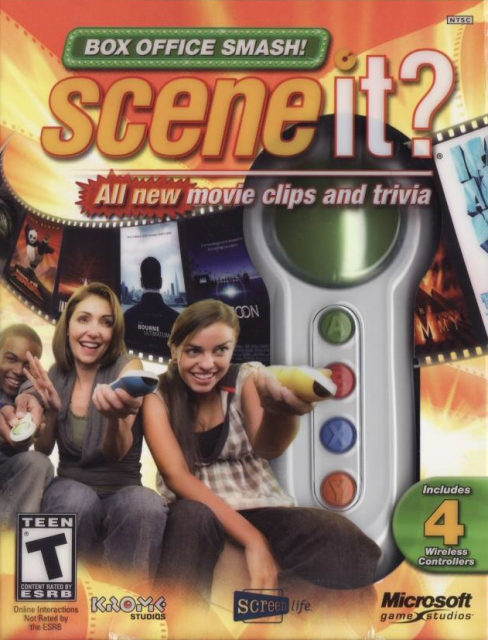 Scene It? Box Office Smash, a follow up to Scene It? Lights, Camera, Action, is a movie trivia game that allows up to four players to play, either locally or online.
Xbox 360

Scene It?: Box Office Smash uses four specially designed Xbox 360 controllers to answer movie-based trivia questions. The game comes bundled with four controllers which each have one large "Buzz in" button as well as the standard A, B, X, and Y buttons. Some questions require the player to buzz in before answering the question, while others simply ask for the correct answer. Also bundled with the game and controllers is an IR receiver to connect the controllers with the players Xbox 360, as well as 8 AA batteries for the controllers to operate. Box Office Smash also will work with standard Xbox 360 controllers, simply using the Directional Pad and button array. the game does not support Microsoft Kinect however.

Scene It?: Box Office Smash features three game modes playable with up to four players. Short Game (Lasts 15-20 Minutes), Long Game (Lasts 25-30 Minutes) and Custom Game, which allows the player to choose his or her options, such as scoring options, or point deductions for incorrect answers. The game goes through a series of three rounds, followed by "The Final Cut" all of which add up to determine the winner. Each round contains a variety of different trivia challenges ranging from "Pictograms" which requires the player to name the movie by combining images to form the title to "Movie Clip" which shows a short clip and then asks corresponding questions following the clip. Each round has one "Movie Clip" segment mixed in with a variety of other game modes. "The Final Cut" is one movie clip segment followed by questions which, if answered correctly, will raise the player's score multiplier to 2x, 5x, and 10x respectively. At the end of the game, the player with the most point is deemed the winner.

Box Office Smash was one of the first Xbox 360 games to feature Avatar Support initially announced at E3 2008. If a player is signed into an Xbox Live Profile, his or her Avatar will be pulled into the game. Props however are not pulled into the game, only appearance items such as hats, shirts, pants and wristbands show up in the game. Avatar Awards from other games also work in Box Office Smash. At the player select screen any players not signed in will receive a randomly generated avatar, which they can randomize as many times as they want by simply hitting the "Y" button.