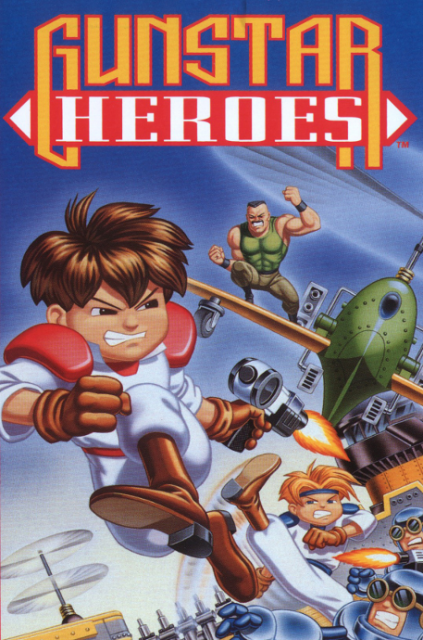 A side-scrolling platformer/shooter from Treasure. Its colorful art style and frenetic shooting action have earned it near universal praise.

Gunstar Heroes is a side-scrolling shooter where two brothers, Red and Blue, must defend their home planet Gunstar 9. The game was released in North America on September 9th, 1993, and Japan on September 10th, 1993. Gunstar Heroes was the first game to be developed by Treasure. The game was published by Sega, so it was originally released for the Sega Genesis, but can currently also be found on Game Gear, PlayStation 2 (as a Sega Ages game), and Virtual Console. The sequel, Gunstar Super Heroes, is on the Game Boy Advance.

Gunstar Heroes was released as a part of the Sega Vintage Collection on the Xbox Live Marketplace and PlayStation Network on June 10, 2009 and June 11, 2009 respectively. It differed from the original version in a couple ways. First, it includes the ability to "quick save" one's game, as the game is being run off an emulator (all other Sega Vintage games have this capability as well). Second, sprites can now be smoothed. Online cooperative play has also been added, as well as the obvious achievements for the Xbox Live Marketplace release and trophies for the PlayStation Network release.

The robot Golden Silver is used to suck dry a planet of all its resources. Professor White was able to defeat this robot in the past by removing its four gems and hiding it on one of planet Gunstar 9's moons. When the Empire found out about this, they sent Smash Daisaku to Gunstar 9. Here he brainwashed Gunstar Green and used him to find the four gems in order to resurrect Golden Silver and continue its resource sucking madness. Red and Blue set out to retrieve the gems and save their planet.

Similar to Contra, the gameplay is 2D side scrolling run-and-gun shooter style and can be played in free form (the player can move while shooting) or fixed form (the player stops to shoot). The game also has melee combat, the player can slide, jump kick, and throw enemies. The weapon system uses four element types that the player can mix and match to yield different types of shots. These types are a lightning laser, flame thrower, homing missile, and a rapid machine gun. Gunstar Heroes is most famous for its boss encounters which have become a trademark of Treasure games. The bosses are usually the size of the entire screen and composed of several sprites against a scrolling background. The transforming Seven Force boss is particularly memorable.

Electronic Gaming Monthly gave Gunstar Heroes the review scores of 9,9,9, and 9 in addition to a "Editor's Choice Platinum" and Game of the Month awards.

This is one of the best looking carts I've seen from Sega in a while. The animation is slick as can be and the use of multiple sprites to form bosses is extremely well done... Definitely one of the most intense games I've seen on the home video game scene. Great gameplay, two player simultaneous action and nonstop intensity from beginning to end.