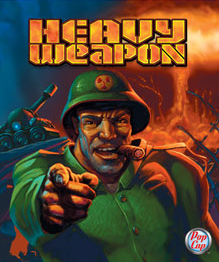 Heavy Weapon: Atomic Tank is a dual-joystick shooter developed and published by PopCap Games for Xbox 360 and PlayStation 3. The game was later ported to the Zeebo by Vega Mobile.

Heavy Weapon is a dual-stick shooter, but unlike most games of this type, the "ship" (tank) remains on a flat surface on the bottom of the screen and can only shoot above or to it's sides. The objective of the game is to shoot down enemy planes, tanks, and missiles while avoiding their attacks.