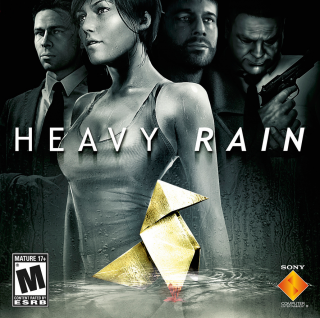 An interactive thriller from the studio behind Indigo Prophecy, sporting a dark storyline involving the investigation of a mysterious serial killer.
PlayStation 3

A spiritual successor to the studio's earlier game Indigo Prophecy, Heavy Rain puts players in the role of four separate protagonists as their stories, which can have numerous branching paths and multiple endings, intertwine into one overall narrative (with the possibility of each of them dying, which continue the story). Along with third-person exploration of their character's surroundings, players converse with timed dialogue trees and use specific button/joystick/tilt prompts for actions (including quick time events for higher-intensity sequences).

The game's story, set in modern day, centers around the investigation of a mysterious serial killer who abducts and murders children (leaving an origami crane in the palm of their hand, becoming known as the "Origami Killer"). Players control four central characters as they hunt the whereabouts of the Origami Killer:

The game later received support for the PlayStation Move on September 22, 2010, adding optional motion controls. While a series of downloadable side-story chapters (called The Heavy Rain Chronicles) was planned, only one chapter was released ("The Taxidermist", showing Madison attempting to investigate the Origami Killer years prior). The game was later re-released in North America (on February 23, 2011 as Heavy Rain: Director's Cut), Japan (on March 10, 2011), and Europe (on August 3, 2011 as Heavy Rain: Move Edition), featuring all updates and DLC as well as bonus content.

The original game was later ported to the PlayStation 4 by Virtuos and released digitally for the PlayStation 4 in North America (on March 1, 2016), Europe (on March 4, 2016), and Japan (on June 1, 2016). It was later bundled with the Digital Deluxe Edition of Quantic Dream's Detroit: Become Human upon its release for PS4 on May 25, 2018. It was ported to PC and released via the Epic Games Store on June 24, 2019.

Although Heavy Rain may seem like a Dragon's Lair type of game, the developers have expressly stated that control of the character is rarely taken away from the player. The player often has direct control of the character, and can walk around at will within a set area using the R2 Button and Left Analog Stick. There are almost no cinematics to watch. There is an investigation portion to the game - mainly when Jayden uses ARI at crime scenes - where the player can freely search anywhere they think they might find a hidden clue. There is another portion of the game that uses QTEs, mostly during fast paced action sequences, to create immersion. The QTEs, however, are not static images prompting button presses, but rather are worked into the environment. At times, multiple buttons will appear on screen allowing you to choose from a number of events whose outcome is felt immediately. The QTEs use every button on the PS3 controller (except L3, R3, the D-pad and obviously the Start and Select buttons) as well as its SIXAXIS functionality. At certain points in the game, the player is required to press a succession of buttons, holding down the previous button(s) as they press the next - these combinations are often constructed in such a way that the difficulty of what the character is trying to achieve corresponds with the physical difficulty of pressing the correct buttons (meaning that a QTE for crawling through live electricity will be much harder than a QTE for going up a hill).

Dialogue trees are used heavily in the games, represented by words encircling the player. The state of the words will correspond to the character's mental state - if they are in a state of panic the words can be shaking violently, making them difficult to read. The same applies to the 'thought mechanic' where by pressing L2 at any time, a 'dialogue tree' will show what thoughts are going through that character's mind.

There is no game over screen, as the game continues to take into account whatever actions occur regardless of how drastically they affect the characters. If a character you control dies, then he or she will remain dead and the investigation will continue from another character's perspective. If all characters die, the plot line will still continue without the impact that those characters could have made.

Development of Heavy Rain began in February of 2006 and was announced at E3 2006, at which it was a tech demo called "The Casting". The game was originally for PC and there were to be two separate releases of the game - one for computers equipped with the appropriate physics processing unit and one for computers that didn't meet the specification. Some of the physics relied on PhysX. The E3 demo made use of AGEIA technology.

Quantic Dream founder David Cage said 2009 in an Interview with VideoGamer.com that ".. we are talking with Sony at the moment about having maybe extra downloadable content, maybe with prequels or sequels about the characters."

Later it was revealed that the DLC would be episodes of the so-called Heavy Rain Chronicles.

- The Taxidermist (at first only available with a preorder code, later through PSN purchase - released on April 1, 2010)

- DLC with a focus on Norman Jayden and how he got addicted to drugs;

- Another episode with you taking the role of the "villain";

On July 2010 Cage revealed in an Interview with Eurogamer.com on subject of the Chronicles that ".. they are on hold to allow the team to work on Move and on new projects, and I doubt they will ever be produced."

Heavy Rain's soundtrack was composed by Normand Corbeil and recorded at the Abbey Road Studios in London. It was made available on the iTunes Store on 23 February, 2010 and on the PlayStation Network on 4 March, 2010.