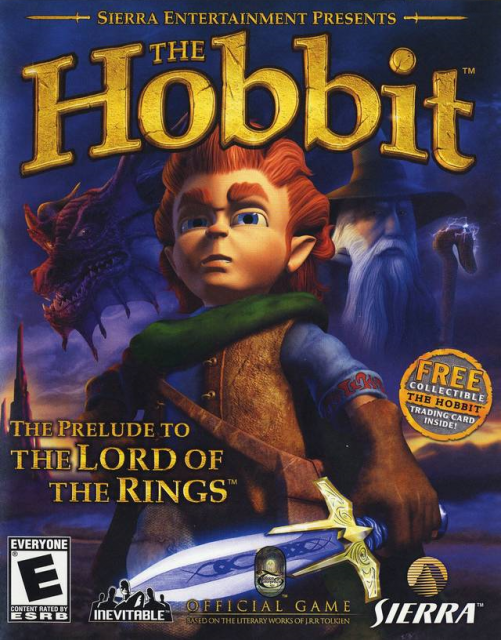 The Hobbit is a 3D action-adventure platformer based on J. R. R. Tolkien's prequel to The Lord of the Rings.
Game Boy Advance PlayStation 2

In The Hobbit, the player takes control of the titular halfling Bilbo Baggins and follows him on a grand adventure across Middle-Earth. Gandalf the Wizard selects Bilbo to help a party of thirteen dwarves rescue their ancestral home back from Smaug the Dragon; he will be their burglar. During the party's travels, Bilbo will find himself battling orcs, goblins, wolves, and spiders, as well as sneaking past trolls and collecting a lot of side-quest items.

As a character, Bilbo does not have an incredible amount of abilities. He can throw stones to knock down items and ward off foes, strike enemies with his walking stick and later the sword Sting, climb ropes and ladders, pick locks via a selection of mini-games, sneak to avoid detection, and use the One Ring to turn invisible. Bilbo can also collect silver pennies which can be used to purchase helpful items from a vendor at the end of each level. There's a small RPG element in The Hobbit; Bilbo gains Courage Points experience for defeating monsters and completing side-quests, increasing his health. Scrolls teach Bilbo abilities which he can use for battle and other situations throughout the game.

Fun fact: Dreamworld and Troll-hole are the only two chapter level titles not taken directly from J.R.R. Tolkien's The Hobbit.

Music for The Hobbit was composed by Rod Abernethy and Dave Adams and recorded live in Seattle with the Northwest Sinfonia. The game's soundtrack won "Best Original Soundtrack of the Year" at the Game Audio Network Guild Awards held at the Game Developer's Conference in 2004.