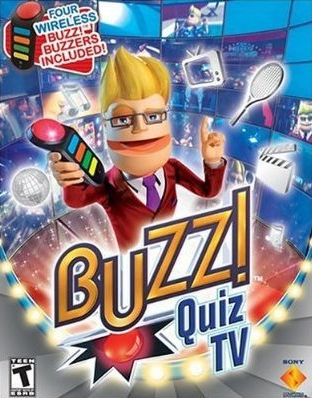 Buzz! Quiz TV marks the debut of Sony's party-quiz series, Buzz!, to the PlayStation 3; adding the ability for players to compete online as well as write their own questions and exchange quiz packs online.
PlayStation 3

Buzz! Quiz TV is the first installment of the popular Buzz! franchise on the PlayStation 3 .  It is developed by Relentless Software Ltd. and published by Sony Computer Entertainment.  Buzz! Quiz TV is primarily based on television quiz shows; setting its quiz show in front of a live studio audience and structuring each section into rounds.  It features various game modes including "MyBuzz," "Sofa vs. Sofa", and online multiplayer with up to 8 players.  One of the biggest new features added to the series, the seventh game in the Buzz! franchise, is the ability for players to create their own quizzes and questions.  Players can create their own quizzes which can be used in both offline and online multiplayer game modes.  Players can also choose to upload their created quizzes to the entire Buzz! community or only share with their friends.  Buzz! Quiz TV is one of the first games to include the Trophy System feature at launch, which was added to the PlayStation 3 features list in the 2.40 firmware update. The game also has PlayStation Eye and EyeToy support, and will take photos while you play the game, which are then placed in albums for you to view later.

Buzz! Quiz TV gives players a choice of general categories in which questions will be asked.  These Channels can be viewed from the Play Buzz menu prior to starting a game.  From this menu, players can choose to have questions asked from all Channels or the player can select a single Channel from which questions will be derived.  The Channels also include more specific subcategories which players will have to choose from within the quiz game.

Around The World
People And Events
Natural World
Science And Technology

Style
Gadgets And Gizmos
Food And Drink
Mind And Body

One of the Key features of Buzz! Quiz TV is the ability for players to create their own quizzes by going to the official MyBuzz website.  By going to the website and signing in with your PSN ID, players can create their own quizzes or even play other user-submitted quizzes and rate them.  Most importantly, players can also play these quizzes and rate them on the PS3 with the disc-based game but unfortunately you cannot create the quizzes with the disc-based game.

Buzz! Quiz TV is the first game in the series to allow online play.  By entering the online mode in the "Play Buzz" menu, Buzz! players from all over the world can go head-to-head and compete in a mutliplayer game.  This mode supports up to 4 players.

Aorta is a vampiric character based on the Bride of Dracula and the Bride of Frankenstein, borrowing her hairstyle from the latter. The aorta is the largest and most important artery in the body, playing on the blood theme.

Ash is based on British rock singers, most likely Liam Gallagher, Richard Ashcroft and Ian Brown.

Cheery is a generic cheerleader character.

Claude is a parody of Marcel Marceau, the famous mime artist. However, the Kenny Everett parody 'Maurice Minor' may be a greater influence.

Donna is based on Madonna and one of her taunts is a move from Vogue.

Dwayne is a stereotypical 1950s geek like George McFly or Bernard from the Maniac Mansion series.

El Hefe is a Mexican luchador wrestler. El Hefe is a misspelling of El Jefe, which means 'The Boss' in Spanish. El Hefe from the band NOFX may be an influence for the name.

Gina is based on various elements of characters from the Austin Powers movies, but could be named after Gina G.

Kumiko is based on Japanese schoolgirls; wearing variations on the seifuku school uniforms.

Leon is based on Napoleon Bonaparte, the famous French military and political leader.

Overlord is based on Darth Vader, Cylons, Cybermen, and the armor of medieval Japanese warlords. He also has some b-boy moves for comic effect, to be completely out of the serious nature of these parodied characters.

Quizman is a generic superhero character but his main blue and yellow costume looks a lot like 80s cartoon character Bananaman.

Rockelle is a parody of Raquel Welch in the movie 1 Million Years B.C. where she plays a cavewoman.

Stevie is  a parody of 70s soul musicians Stevie Wonder and Bootsy Collins.