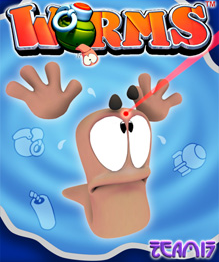 Worms is a remake of the PC classic of the same name from TEAM17 and was released on the Xbox LIVE Marketplace on March 7, 2007 and eventually joined the Arcade Hits scheme on November 13th 2008. An iPhone version of the game was released on the Apple App Store on July 11 2009. Worms is a light hearted turn based strategy game of open warfare between multiple teams of worms on destructible landscapes.  The game allows you to create a squad of four worms; each worm can be given a unique nickname which appears above their heads during gameplay. You can also name the squad and choose from various grave stones (these replace dead Worms) and select humorous voices from the voice bank.

The last team standing wins and the game is played in turns. A different member of a team is selected with each turn and is able to use one of a large arsenal of weapons and tools or move around the map. Each turn has a time limit to completed and has a 'retreat time' to get your worm to safety at the end of the turn. You win the game by using your weapons to either reduce your opponents worms health down to zero or by knocking them off the map. Each round has a timer and when the timer reaches zero, the game goes in to 'sudden death' and all remaining worms health is reduced to zero and the water at the bottom of the landscape begins to rise.

There are 3 tutorial missions that will introduce you to the controls and teach you how to play the game.

The campaign of the game consists of 20 'Challenge' missions that places you in to a death match against 3 AI opponents. The AI is made up 3 teams, each of varying difficulties, and the challenges get harder as you progress.

Multiplayer mode allows up to 4 players to battle against each other Offline on Local Play or Online through Xbox LIVE.

There was some controversy as there are a lot of weapons that have featured on previous Worms’ titles that are not present in this game, the most significant of which being the Holy Hand Grenade. This weapon, along with others were added to the Playstation 3 release.

However, It should be noted that new weapons will not be available for future download.