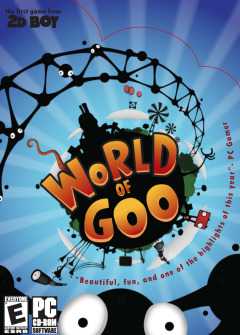 World of Goo is a critically acclaimed physics-based puzzle game following the travels of a horde of goo balls through a world shadowed by a mysterious corporation. The game was produced and developed by the independent company 2D Boy.

Released in 2008, World of Goo was the first and only full game effort made by independent developer 2D Boy. Combining their experiences in game development at larger companies with a love for physics and adventure games, Ron Carmel and Kyle Gabler formed a critically acclaimed title. True to their inspirations, World of Goo is driven by physics-based gameplay while still exploring themes such as consumerism and the media's portrayal of beauty.

World of Goo is an expansion of Tower of Goo, a small prototype made by Kyle Gabler for his Experimental Gameplay Project, a rapid prototyping community. The goal of this game was to build as large of a tower as possible, a goal that would later be adopted by World of Goo's sandbox mode, the World of Goo Corporation.

The story centers around the World of Goo Corporation, a satire of big businesses that is exploiting goo balls for profit by turning them into popular products such as cosmetics and beverages. The corporation has set up pipes throughout the goo balls' home world in order to collect them. The goo balls work tirelessly to reach these pipes, as they constantly seek adventure and see the pipes as "warm and inviting." The goo balls sucked into the pipe during each level are collected at the World of Goo Corporation, where they instinctively build a tower to the sky. While the goo balls remain blissfully unaware of most of what is going on during the story, the player guides them through a quest to stop the World of Goo Corporation and finish their journey to the sky. The story is revealed to the player through brief cutscenes along with quips from The Sign Painter, an unseen figure who communicates exclusively through signs scattered throughout the world.

The story begins in The Goo Filled Hills, a pastoral island home to many goo balls. Desiring adventure, they escape the island using large balloons in hopes of finding new lands. The story then shifts to Little Miss World of Goo, a land where beauty reigns. There, a giant statue is encountered. This statue powers the majority of the World of Goo through the raw power of its beauty. This beauty, however, is failing as the statue ages. The player orchestrates the injection of Beauty Goo into the statue, ensuring its continued operation. The rejuvenated power source allows for a mysterious factory to open at the southern region of the world.

The next region, titled Cog in the Machine, follows the journey of the goo balls through this newly formed factory where outsourcing work is done for the World of Goo Corporation. Eventually, "Product Z" is launched at the factory, converting the 2-dimensional world into 3D. An error message informs the player that he/she is incompatible with this new world, prompting him/her to seek technical support in the next level, the Information Super Highway. In this world, the goo balls find themselves inside a largely abandoned and dilapidated internet. They first upgrade the woefully outdated internet to support modern graphics, and then proceed to MOM, a spambot who teaches the player how to destroy the World of Goo Corporation. This is done by "undeleting" all of the deleted spam email in the history of the internet and sending it to the World of Goo Corporation. This plan succeeds, blowing up the corporation and returning the world to 2D.

At this point, the main objective for the player seems complete, as the corporation played the role of the villain. The goo balls, however, have been ignorant of the entire affair, and continue their tireless quest upward. The player is taken to the epilogue level, titled The End of the World. Here, the goo balls take on increasingly difficult challenges, during which The Sign Painter loses faith in their ability to succeed. In a twist ending, a sign left in the final level reveals that each and every goo ball has been sucked up by the still active pipe network and transported to what was once the World of Goo Corporation. The sign then complains that a layer of smoke from the explosion of the corporation is blocking the view from a telescope at the center of the level. The player helps by attaching flying fish to the telescope in order to raise it above the smoke, allowing The Telescope Operator (the new title taken up by The Sign Painter) to see far, eventually spotting a faraway world seemingly inhabited entirely by goo balls, suggesting that this world may have been what the goo balls were seeking during their quest upward.

In World of Goo, the player builds structures using balls of goo in order to travel from the starting position to a pipe that sucks in excess goo balls that have not been used. While completion of the level allows for progression to the next level, goo balls collected in excess of the level requirement move to the World of Goo Corporation, a sandbox level in which players compete to build the highest tower using a maximum of 300 goo balls. Some end-of-chapter levels break this convention, requiring the goo balls to reach a certain location or complete a certain task in order to move the story forward.

Goo balls come in many varieties, each with its own properties such as tensile strength and flammability. Although missteps can result in an un-winnable scenario, some levels allow moves to be undone through a limited supply of "time bugs." These bugs will regenerate gradually after being used.

The developers showed a general dislike of overly artificial UI. The game's very world map represents this idea. The idea of clicking an island in order to zoom in on it and begin playing replaced conventional menus. The game's pipe system was created in order to give an exit that felt natural and fit with the story. The above-mentioned time bugs existed in place of an "Undo" button, turning a basic utility into a part of the game world. The issue of a pre-game tutorial, which troubled developers in early builds, was solved with a concise sign in the first level. More complicated concepts are handled as they come along in later levels, typically explained by The Sign Painter. The few conventional UI components are restricted to corners, small and deemphasized. The developers showed a particular apprehension for artificial time limits, presenting the level Super Fuse Challenge Time as an alternative. The only level featuring a time requirement, Super Fuse Challenge Time involves a slowly burning chain of flammable Fuse Goo attached to the structure that the player is building. If the player does not complete the level quickly, the structure is burned to the ground, forcing the level to be reset.

The World Of Goo soundtrack, composed by Kyle Gabler, can be downloaded for free here.