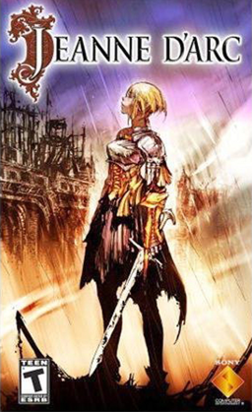 Jeanne d'Arc is the first tactical role-playing game created by Level-5, as well as its first game on the PSP. The game came out in Japan on November 22, 2006, and in North America on August 21, 2007. It is a re-imagining of Joan of Arc's involvement in the Hundred Years' War, adding fantasy elements and other embellishments to a loose version of the real history.

The combat in Jeanne d'Arc is basically similar to other strategy RPGs; you play from an isometric or top-down camera angle and move your party around a grid-based map. However, Jeanne d'Arc adds several unique elements to the otherwise standard gameplay.

In Jeanne d'Arc, there is an attack system known as "Burning Auras." When a non-special melee attack is performed on an enemy, the map square on the other side of the enemy opposite from the attacker is imbued with a Burning Aura. If another allied character steps into this aura and attacks someone, their damage is heavily increased. If the Burning Aura is cast on a square where an allied character is already standing, that character becomes a portable aura, allowing them to choose where to attack with the full Aura power. An Aura created by a character who has an aura on them already will be more powerful than a normal Aura. Auras can be chained effectively for massive damage build-ups.

The Unified Guard system in Jeanne d'Arc provides a defense bonus to allied characters in proximity to other allied characters. The amount of characters in the general vicinity and how close they are to the ally receiving an attack directly effect the applied defense bonus. The system can be used to boost counter rates and deflect would-be fatal blows, allowing for more strategic bonuses for certain formations and character groups.

The main character Jeanne and a few other characters she will meet on her journey have special armlets that, when they have waited long enough during a battle, will be able to transform into special armor for one or few turns. Doing so makes them stronger than usual and grants them special skills they cannot use otherwise. If they manage to defeat an enemy while transformed, they are given an extra turn. It will be in the player's best interest to decide when is right time to transform to get the most use of it, especially considering it can easily turn the tide of a battle. Once a transformation is used, that character cannot transform in that state again for the rest of the battle. However, players will be able to get transformation gems for the characters' armlets throughout the game. These will give characters more chances to transform, as well as having their own special skills to use.

Jeanne d'Arc's overworld is a map of the entire game world, which slowly unlocks as missions are completed. Progression is mostly linear, although the player has the option to back-track and grind for levels or search for hidden items within any map previously played at any time. Special Free Combat areas and shops become available to the player as time goes on; in order to fully collect all of the game's unique weapons and upgrades, it is necessary to explore these fully.

The story of Jeanne d'Arc is based on the historical accounts of Joan of Arc and the 100 Years' War. In this rendition of the story, humans and demons have been fighting for ages, but were banished by five warriors who joined the power of their magical bracelets. Many years have passed and England and France are caught up in the 100 Year War. A small village of Lorraine region is then attacked and one of the girls in the village, Jeanne, is told by the voice of God that she has to save France.

The music for the game was composed by Takeshi Inoue. Track listing: