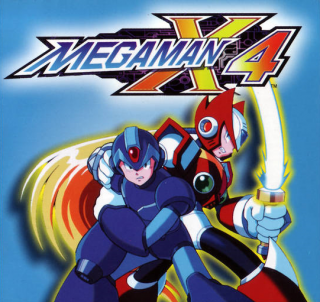 Mega Man X4 was the first in the series created specifically for Sega Saturn and Sony Playstation. Zero also debuts as a full-fledged playable character with his own gameplay style.

Mega Man X4 (known in Japan as Rockman X4) is a side-scrolling action platformer developed and published by Capcom for the Sega Saturn and PlayStation on September 1997 in the US.

The fourth game in the Mega Man X series (and the sequel to Mega Man X3), the game is the first to be built for 32-bit consoles (allowing them to use a new higher-quality art style, higher-quality audio, and a game saving system). Mega Man X4 also features animated full-motion video cutscenes and separate campaigns for both Mega Man X and Zero (who now has a different close-ranged combat style with his Z-Sword).

Set in 21XX, shortly after the events of Mega Man X3, a new Reploid anti-Maverick military force has risen (the "Repliforce") led by the powerful Reploid, General (and his second-in-command, Colonel). When massive floating city Sky Lagoon crashes down to Earth (killing millions of civilians) and Repliforce is believed to be behind it (soon regarded as a force of Mavericks), X (teamed up with rookie Maverick Hunter Double) and Zero (teamed up with Colonel's kind-hearted sister, Iris) must investigate the Repliforce's plan to build a utopian space station (believing it to be used for a more sinister purpose).

The game was later released for the PC in Japan (on December 3, 1998) and North America (sometime in 1999) and is included in the Mega Man X Collection compilation for the PlayStation 2 and GameCube (released on January 10, 2006).

The gameplay for X is similar to the previous games in the series; X has his X-buster that can be charged up to shoot out a powerful projectile, he can climb on walls, and has a dash move. When bosses are defeated, X can inherit their powers in the form of a weapon with limited ammunition. X also has armor upgrades - Helmet, legs, body armor, and X-Buster - that are found in four of the eight levels; they can upgrade X's power for the X-buster, and others can give him special abilities that he never had.

Zero is similar to X in terms of basic mechanics (Dash and climb), but differs greatly in terms of combat. Zero is more up close melee style, he also has no projectile attacks (With the exception one that is earned by Storm Owl). Zero has no armor upgrades - it's partly due to the fact the armor upgrades are not compatible to Zero (It was explained in Mega Man X5). When a boss is defeated, Zero learns a new technique instead of a new weapon - he also has no limit to how many times he could use his newly learned techniques.

Other upgrades can be found in each of the stages. Such as heart containers, that can increase the health bar; and energy capsules that's use to store extra health. In the previous games, the player can hold up to four energy capsules, but in Mega Man X4, only two are found for the health bar and a third one is use to refill a weapon's ammo.

The most well drawn level in the game, the jungle level has X or Zero going through streaming water while battling javelin wielding mavericks that can shoot spears from their backs in eight different directions. Other areas contains large gaps with a waterfall raining down in between with falling logs that are used as platforms for X or Zero to get through. Mechanical bee hives are also present - they can generate robotic killer bees. Robotic snakes are also found - they can sneak up on X or Zero while crossing through trees.

A snowy level that's filled with mechanical polar bears that have the ability throw out sharp ice blocks. Other sections have X or Zero going through spiked floors with sliding platforms that will disintegrate in a short period of time; on the platforms, are mavericks with skiing gear on. The other section of the stage is filled with frozen blocks that have bombs or the little helmet mavericks frozen inside. And the last sections of the stage has a bird that can change the scenery by freezing everything.

All of this level is done via "land chaser" - a hover bike that can shoot out projectiles. It's a fast moving stage that has pipe bombs planted on the ground and other mavericks on land chasers as well; Jet Stingray will appear in the middle of the stage to shoot out some ground hunters to try to stop X or Zero. The land chaser has the ability to dash on the ground or in mid-air.

Not much platforming in this stage, but there's lots of shooting involved. X or Zero are on top of a train going through waves and waves of mavericks - some of them are equipped with hand guns and can throw grenades. At one point one in the stage, X or Zero will be in control of a mech suit that's equip with a laser sword that can do some heavy damage.

Probably the most creative stage, Cyber Space contains yellow spheres moving along slowly across the stage; if unable to avoid it, the sphere will suck X or Zero to the center of it and do some damage. Portals will also appear with mavericks coming out of them. While X or Zero is going through the stage, they will be timed, if they make it through a section of the stage quick enough, they will be ranked. If they get the highest ranking (S rank), they will go through a short area that contains a heart container, energy capsule, or an armor upgrade.

At the beginning of the stage, X or Zero will go through a flight of stairs that will actually rotate 360 degrees while moving along (kind of giving the player the sense that it looks like 3D). Other areas have X or Zero going through short tunnels with mavericks with powerful drills on top of the tunnels ready to destroy the place as soon X or Zero crosses through. Another part has X or Zero moving upwards through a small corridor filled with hovering mavericks that shoot out projectiles.

In this stage X or Zero will be on top of an aircraft going through laser shooting canons, giant mavericks that shoot out missiles, and even more gigantic canons that can shoot out devastating lasers. Another mech suit will be present for X or Zero to take control, but this one is different than the one that was found in the Slash Beast stage. This mech suit can hover in mid air and can shoot out charged up projectiles.

Description: He protects the weapon which lies deep within the snow base.

Objective: "We've discovered a hidden base. Halt production of their new weapon."

Descrption: He destroyed the city and escaped to the Sea.

Objective: "Repliforce decimated the city and left. Pursue them aboard a land chaser."

Description: He defends the Military train to protect the supply of goods.

Description: He protects the secret weapon of the jungle.

Objective: "Infiltrate enemy-occupied jungle and destroy the weapon under construction.

Description: He occupies the laboratory and attacks anyone who visits there.

Objective: "The abandoned lab is now operational. Investigate and destroy the lab.

Description: He lives in cyber space and he wants to destroy the Network System.

Objective: "A bug has corrupted the network. Dive into Cyber Space and exterminate it."

Description: He left with a space fortress to conquer the air.

Objective: "The Repliforce ship has taken off. Pursue and blast it out of the air."

Description: He betrayed the irregular hunters and hid himself in a volcano.

Objective: "Dragoon of the 14th unit is a traitor. Locate and bring him back to hunter HQ."