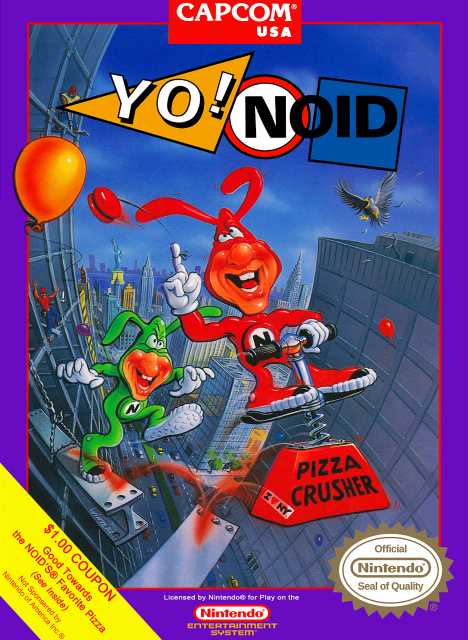 A 2D platformer featuring the popular Domino's Pizza mascot from the 1980s. It is a graphically altered version of the Famicom game Kamen no Ninja Hanamaru.

Yo! Noid features The Noid character from 1980s Domino's Pizza advertisements and his quest to save New York city from an attack planned by "Mr. Green." Yo! Noid differs from several other games of its era that were created to push a product or mascot in that it is fairly high in difficulty; this is likely due to the fact that the game is merely a port of a Japanese game called Kamen no Ninja Hanamaru with all of the background art and sprites replaced.

Kamen no Ninja Hanamaru ("Masked Ninja Hanamaru") is functionally identical but for the artwork. The game also has additional levels, presumably removed in the remake because they wouldn't fit as well with the Noid theme. It is not to be confused with Shouei System's Kamen no Ninja Akakage, despite the similar name.

The majority of the game can be classified as standard 2D platforming, requiring the player to guide the character to the end of the level without being hit or falling off the bottom of the screen. A few levels have variations, such as one in which the Noid rides a skateboard, another auto-scroll level, and two levels where the player is required to control a gyrocopter. In all levels, being hit once will cause the player to lose a life. The difficulty is harsh, mainly due to the fact that losing a life means the player will have to restart the entire level again because there are no checkpoints.

Yo! Noid may be most memorable for its Pizza Eating Contests at the end of most levels, which seemed to function as a replacement for boss battles (even the final stage in the game does not have a traditional boss battle). These contests are essentially math-based puzzle mini-games. The players objective is to bet more pizzas than the 'boss.' (If the 'boss' bets 2 pizzas the player must bet 3 or more to win.) The 'boss' will normally be able to bet high pizza amounts than the player but the player has 4 power ups to use against the boss. (2 types of peppers that will cause the 'boss' to not eat his pizzas and two types of multipliers.)