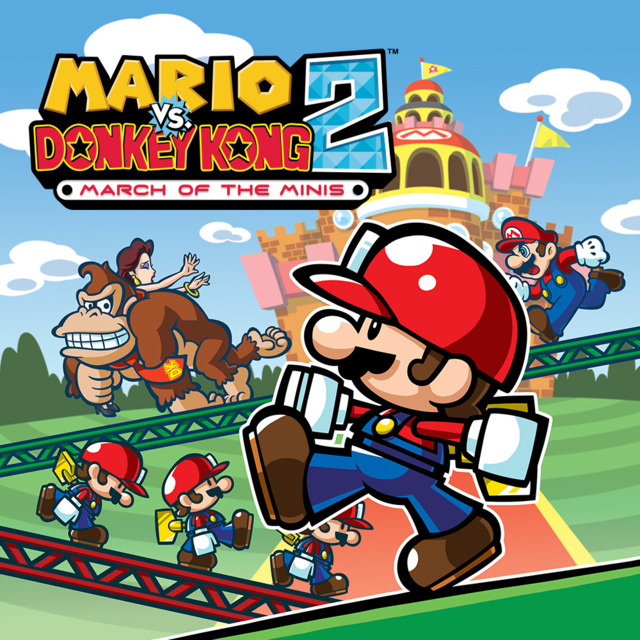 Mario vs. Donkey Kong 2: March of the Minis

Guide miniature Marios to save Paulina from the grip of Donkey Kong.
Nintendo DS Wii U

Mario vs. Donkey Kong 2: March of the Minis is the Nintendo DS sequel to the Game Boy Advance Game, Mario Vs. Donkey Kong, which was a spiritual successor to Donkey Kong for the Original Gameboy.

Super Mini Mario World, an amusement park apparently conceived by the Mini Mario Toy Company and Mario himself, has opened and Mario invited special guest, Paulina, to cut the ribbon for the opening. Donkey Kong sees Paulina adoring a miniature Mario toy and showing no affection for his miniature Donkey Kong toy, so Donkey Kong in a fit of anger steals Paulina and takes her 8 stories up to the roof. Mario takes it upon himself and his wealth of Mini Mario toys to go save her.

The gameplay of Mario vs. Donkey Kong 2 is comparable to Lemmings in that the goal of the game is to micro-manage multiple characters, trying directing them towards an exit. There are eight different themed "floors" in MVD2, each containing nine levels and a boss battle you must clear to advance. To clear a level, the game requires you to direct at least one Mini Mario to the goal, although getting more will help you in boss fights and increase your score. You will get game over if time runs out or all of you Mini Marios break, which can be caused by them either running into enemies, falling from high ledges or landing in spikes.
There's also a Construction Mode, where you can create levels, then distribute and download them through the Nintendo DS Wi-fi Connection. You gain construction pieces to build with as you progress through the game and collect certain objects.

This game is controlled entirely with the stylus, with the buttons and d-pad only being used to scroll through the level. You direct the Mini Marios with the stylus, swiping across or poking them to control them.

After clearing all nine levels of a floor you must face a boss fight against Donkey Kong. These fights take up both screens and the goal of these levels is to hit Donkey Kong at the top of the level by shooting Mini Marios at his through a cannon, Bust-A-Move style. You control the direction or the position of the canon by a wheel on the bottom of the screen, which you turn by sliding your stylus over it, and to shoot you must tap a button located on the cannon. You must take care while aiming not to hit the enemies and various objects dropped by Donkey Kong, because you only have a limited number of Mini Marios at your disposal. The number of Mini Marios available to you is dependant on the amount of Mini Marios you've saved in the nine levels of the floor before the boss fight.

After you get all the surviving Mini Marios to the exit, the level will end and you will be scored on how well you did. Your score is represented by a star, which is either bronze, silver or gold depending on how high your score is, gold being the best and bronze being the worst. Get enough gold stars and you can unlock stages and other unlockables. Getting a gold star can be very hard though as there are many factors you must adhere to in order to get it.

You are also scored on how well you do in boss stages, which can be much more difficult then to do then getting a gold star in a normal stage. To do this you must not get any of your Mini Marios killed and you must complete the stage quickly. Aiming your Mini Marios perfectly and learning the boss patern can make earning the gold stars for these stages easier.

Completeing levels and earning gold stars earns you unlockable items. These can either be things like parts for the construction mode, or movies and pictures. Collecting all the cards in a floor will unlock mini games for you to play, like a Whack-a-Mole type video game where you must tap shy guys as they pop out of Mario pipes. You can also unlock secret stages by getting high scores.
Toki Tori Lemmings Contra 4 Donkey Kong Mario vs. Donkey Kong: Minis March Again! Lemmings 2: The Tribes Pokémon Pinball Mini Rocko's Modern Life: Spunky's Dangerous Day Coropata