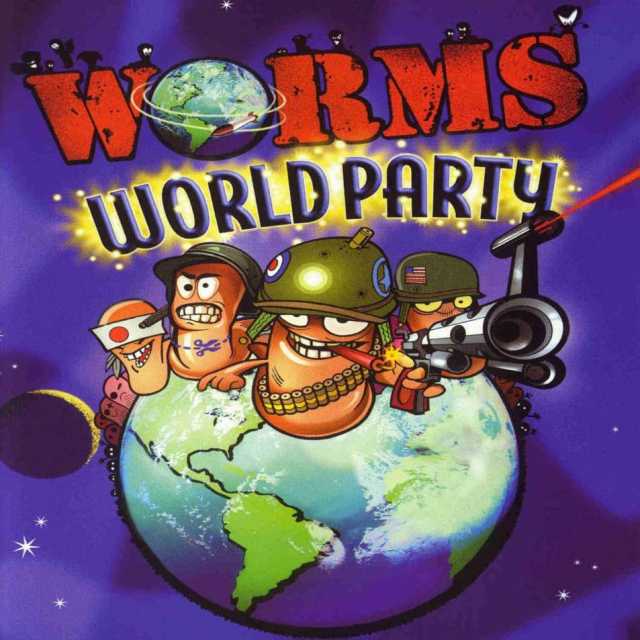 Worms World Party, the seventh game in the Worms series, was released in 2001.

As with previous Worms games, its a side scrolling turn based strategy game where the player controls their team of well armed and athletic worms against up to 5 AI or player teams.

The game has various modes, from a fairly simple deathmatch mode, to a mode where after each win, either a worm is taken off the team or a worm is added to an AI team, thus making it much more difficult and rewarding with each successive win. There is also a training mode to help perfect the art of a wind guided rocket shot, there's also a story mode and various fun multiplayer modes including online and offline local play with up to 6 players off and online.

There is over 1000 game styles, and an infinite number of custom maps and game types may be added.

For slimy invertebrates, the worms are very agile and skilled in the art of jumping, even doing a backflip jump to get onto even higher ledges, and among other things they are able to parachute and use ninja ropes to reach otherwise unreachable places.

Weapons greatly range from a bog standard shotgun or handgun, to the much more fun to use banana bomb, sheep bomb, holy hand grenade and... The DONKEY, the Donkey is well.. a huge stone donkey that can be command to fall anywhere, bouncing up and down upon impact and blowing the general area to shit until it reaches water, usually taking a few unfortunate worms with it.

Sudden Death occurs either after an Indian Nuke Test is used, when the game gets too long or after a player initiates it (local multiplayer only).

Online worm fun is where it kicks off, from:

Sometimes players come across a team with a cock as their gravestone and harry potter sounds, which is always fun, and also create custom maps, be it a simple maze with explosive barrels everywhere, or for the more skilled and being savvy, create an awesome map like Pamela Anderson stretched out naked for the team of slimy critters to wriggle all over before blowing her bazooka's off with.. a bazooka. In general pretty much everything can be edited and personalized.

Most online games involve frequent use of the ninja rope, the community has perfected their ninja skills, roping from one side of the landscape back and forth collecting items and zooming through impossible looking gaps to land gracefully on a ledge before dropping a dynamite and swinging off again.

Pretty much every online match will consist of one or more of these game rules. All were made up by players, these rules don't have to be followed, but the other players can punish other players, as explained below.

Shopper is a game type where:

CBA (collect a crate before attacking)

ABL (Attack anyone except the one in last place)

If a player breaks one or more of these rules then that player is the Cow. The other players should say "Cow" on the in-game chat to notify a break in the rules. The "Cow" will have to skip their next turn in accordance to the rules. If he or she doesn't skip, the other players may KTC (Kill the Cow) in which all players attack the Cow to remove him or her from the game and generally embarrass them.

WxW is pretty much the same rules as a shopper game, except a lot more skill is required and must touch a certain number of walls before attacking, usually using a ninja rope, leaving very few precious seconds to attack before running out of time, if there's no damage to the player whilst swinging..

Rope-Race is usually played in a maze style map containing a start point and a finish. It begins by placing worms at the start, no rope knocking (jumping from a rope to hit an enemy worm, usually into water) and first to the finish wins. Another version of this is Time-Trial Rope-Race, in this game type, there is no timer to complete the level. Once all worms have had a single turn, whoever made it to the finish in the least amount of time wins and is hailed champ!!

Fly, Like WxW, Fly is based on the same rules as a Shopper game, but an extra rule FBA (Fly before attacking) is added. The player must "Fly" over the center point of the map using a parachute or ninja rope, or any other way the player manages to do so, it will most likely be a high or wide object. Techniques of flying include letting go of the ninja rope just after bouncing off a wall to send the worm flying, or swinging around a loose pixel created from an explosion.

WWP has 60 Weapons and utilities in all including:

Grenade - Can be tossed in any direction. Player is able to set the timer from 1-5 seconds, no wind effects.

Cluster bomb - A red grenade that scatters a cluster of explosions upon detonation.

Mine - Proximity mine that can be dropped anywhere. When a worm gets near, it explodes unless its a dud.

Banana Bomb - Same as cluster bomb only with bananas that are much more powerful and bounce.

Shotgun - The only weapon that can be fired twice in each round, good for taking down two low health enemies.

Uzi - Spray of bullets, not very useful for killing but good for knocking enemies into water or barrels.

Dynamite - Very powerful but cannot be thrown, but can be dropped from a rope or parachute.

Sheep - A Fluffy little sheep that packs a powerful punch when detonated.

Homing Missile - Affected by wind, like a bazooka but it travels to where the cursor is placed.

Air strike - Can be launched from anywhere in the level. 5 missiles that fall from the sky onto the player's target.

Girder - Allows the worm to place a horizontal, Diagonal or vertical platform anywhere in mid-air.

Blowtorch - Can be used to burn other worms or burn a tunnel into the terrain.

Fire Punch - A vertical melee attack that cuts through terrain.

Kamikaze - The worm sacrifices its own life, if aimed correctly, can take out another player, cuts through terrain.

White Flag - Used to give up and therefore lose the game.

Ninja Rope - Allows a worm to climb, swing, and rappel around the terrain. While on the rope, a worm can drop dynamite or other explosives or even parachute.

Teleport - Allows worms to move instantly to any desired place on the terrain. Ending turn upon arrival.

Holy Hand Grenade - Huge explosion causing a lot of damage to any worm unfortunate to be in range.

Pneumatic Drill - Only useful for drilling holes to hide in, or drilling through an enemies squishy head.

Mortar - Can't control the power of this as it just fires straight, pretty hard to use with no prior knowledge of how this works.

Super Sheep - Like sheep except another press of the action key/button makes it fly and controllable in mid-air.

Napalm - Like air strike but with fire, strongly affected by wind.

Homing Pigeon - Similar to the homing missile, the pigeon is better as it can move to avoid colliding with scenery and can reach tighter places.

Handgun - Causes small damage to worms and terrain, not worth using unless as a last resort or to finish off an enemy.

Mini-gun - Powerful enough to create a worm sized hole in the terrain and if every bullet hits.. maybe to kill.

Mole - Mole Jumps and burrows into land, it also explodes.

Mad Cow - Release a troop of timed cows, each causing a massive explosion.

Baseball Bat - Smack a worm and watch it fly, great to use at the start to get rid of one full health worm via water.

Bungee - Jump from a ledge using this, and will hang there like a worm on a fishing hook, doesn't use move and can drop explosives.

Fast Walk - Exactly what it says, lets the worms travel faster for one turn.

Skip Go - If hiding safely in a hole, use this to skip the move.

Jet pack - A jet pack with a limit of 30 flight time, continuous flight would be about 7 seconds.

Worm Select - Gives the ability to switch between worms and then attack.

Skunk - Like all animals its explosive, but as this releases toxic gas from its arse that makes all infected worms lose 5 health each turn, the explosion is smaller.

Donkey - A huge concrete donkey that falls where it is command to, blows up terrain with each impact and bounces straight up and down until it reaches water, on smaller fort maps this could take out the whole enemy team.

Indian Nuclear Test - Sudden Death, Rising water and poison water, get too close to the water and get sick, combined with sudden death its lethal

Suicide Bomber - Best used for the player's favorite enemy and it is self detonated, if that isn't enough it also infects the enemy with sickness(same as skunk).

Molotov/Petrol Bomb - Explodes on impact causing a small or large area of log lasting flame, depending on the surface its thrown on, it can spread quite a bit.

Flame thrower - Affected by wind, shoots flames, great for damaging and moving worms over a ledge or closer to a barrel to then explode, Short range.

Invisibility - Online only, makes the worm invisible to the enemies.

Earthquake - Only use this if the worms are in a safe place, not near mines, water or high falls, shakes terrain usually resulting in worms going for a swim.

Mine Strike - Drops 5 Mines onto the player's target, mines bounce and scatter on landing.

Mole Squadron - 5 moles dropped where the player chooses, excellent if the player wants some holes dug, moles explode on impact after digging (either dig into water or drop into an underground cave and explode).

Scales of Justice - Adds 2 teams health together and splits it evenly, good for stealing health from enemy worms.

Magic Bullet - Even more advanced than the homing pigeon, this beast will find its target, unless they're hiding in an underground cavern.