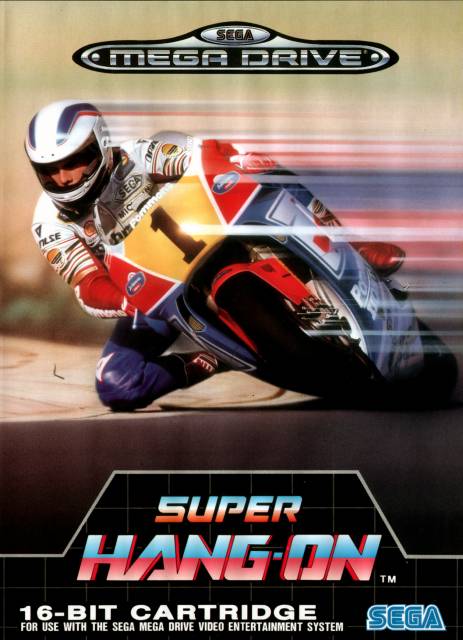 Super Hang-On is the sequel to the praised Hang-On. There are two modes of play and several stages available in this motorcycle racing game.

Super Hang-On is a motorcycle racing game released for a number of different systems and included on a number of different compilations. The home versions of the game include a new mode, titled "Original Mode," which allowed the player the ability to race for money and subsequently spend the money on various upgrades for their motorcycle.

There has been speculation over the idea that a new Super Hang-On game may be released that stems from Sega renewing the Super Hang-On trademark in April 2006, but this has yet to be confirmed or denied.

Super Hang-On has three main functions to race past the traffic and navigate the turns of the course.

In the Arcade version, the player sat on a model of a motorcycle and used the handles to accelerate, the brake grip to brake, a button to use turbo, and tilted the motorcycle to turn left and right.

The player starts a stage with an certain amount of time. To continue racing, the player must clear a stage before time expires. The player's game ends when the timer hits zero or when he clears all the stages on the course.

Super Hang-On offers four courses of varying difficulty and number of stages for players to race on.