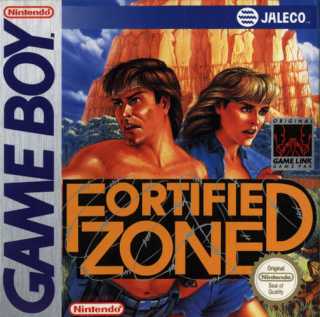 A top-down shooter from Jaleco, in which two highly trained soldiers infiltrate a high-tech military base.

Fortified Zone, the first game in the Ikari no Yousai franchise, was released February 26, 1991 by Jaleco. The game is a top-down shooter, similar to the more action oriented portions of the original Metal Gear. Fortified Zone later had a Japan only sequel for the Game Boy, titled Ikari no Yousai 2, and a Super Nintendo Entertainment System sequel titled Operation Logic Bomb.

The game stars two elite commandos: Masoto Kanzaki (the male commando) and Mizuki Makimura (the female commando). Their goal is to infiltrate a jungle base.

There is a lot about Fortified Zone that can be considered unique for its time, particularly the ability to switch between the two playable characters at any time during the game. Masoto and Mizuki have separate abilities that must be utilized in order to gather special items, reach secrets, and pass crucial parts of the game. Masoto is able to use special weapons, such as hand grenades and a flamethrower, while Mizuki can jump.

At four stages in length (titled, in order, Field, Jungle, Caves, and Complex), Fortified Zone is a relatively short game. The goal in each stage is to reach the boss, by reaching a particular set of stairs leading to the respective boss room. The boss is in an isolated room each time, and upon defeating him the player moves onto the next level.
Ikari no Yousai 2 Metal Gear Metal Gear 2: Solid Snake Cytron Operation Logic Bomb