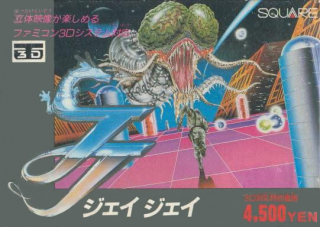 Japan only sequel to 3D-World Runner. JJ is short for "Jumpin' Jack", the protagonist of the game. It was released in December 1987.

JJ: Tobidase Daisakusen Part 2 was developed by Squaresoft for the NES and continues the story of 3-D World Runner. As in that game, the player character moves towards the screen while shooting down hordes of enemies heading towards him (and the viewer).

The game utilizes a form of 3D that requires a special pair of glasses, released in Japan as the Famicom 3D System. Neither the glasses nor this game were ever released outside of Japan.

Of note, this would be the last game Squaresoft made before Final Fantasy.