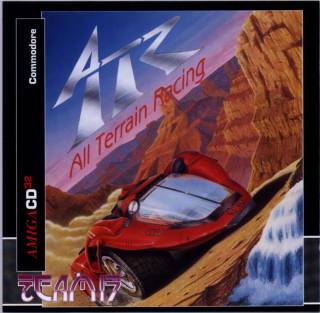 ATR, or All Terrain Racing is an Amiga and CD32 game from the famous software house Team 17 that later went on to create the worms and arcade pool series.

Like many amiga racers from the era ATR was a top down racer. This meant that the games only viewpoint was from high in the sky looking down on the track. Handling was based on drifting around corners and slamming into opponents.

The vehicles in ATR are all "buggyish" in their nature with a futuristic slant on the stylings. This futuristic styling was carried over into some of the assets in the level design leading you to think that the whole game was set in the near future.

Unlike many of the top down racers of the time tracks had short cuts which added an element of strategy. As well as shortcuts tracks also had environmental hazards you had to avoid such as oil slicks and small jumps. Tracks also had turns that were not just 90 degrees in nature (a shortcoming of ATR's precursor Overdrive). Pickups such as turbos where littered about the track.

You could also upgrade your car in ATR with advanced engines, gearing systems, tyres and fuel, all of which could be customised to the terrain you were racing in.