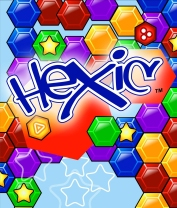 Designed by the original creator of Tetris, Hexic is a tile-swapping match-three puzzle game involving hexagonal pieces. It was originally a browser-based game via MSN Games, and is best known for its Xbox 360 port (titled Hexic HD) which was included in early Xbox 360 hard drives.
Xbox 360 Games Store

Hexic is a tile-matching puzzle game developed by Carbonated Games and released by Microsoft Game Studios for web browsers (as part of MSN Games) on July 2003.

Designed by Alexey Pajitnov, best known for creating the game Tetris, Hexic builds on the tile-swapping "match-three" gameplay of games like Bejeweled by having players rotate clusters of hexagonal pieces to form tight-knit clusters of matching colors.

Along with ports to Windows Mobile devices (by Astraware on March 27, 2008) and to Zune devices (on September 16, 2008, bundled with version 3.0 firmware), the game received a port to the Xbox 360 as Hexic HD on November 22, 2005 (as a launch title for both the system and the Xbox Live Arcade service). Hexic HD was notable for being pre-installed on early Xbox 360 hard drives, later receiving a free digital release on the Xbox Live storefront. Along with a less-pastel appearance and high-definition graphics, Hexic HD features an experimental ambient-techno soundtrack by Jerry Schroeder (which was later released under the album Hexophilia).

The game later received two direct sequels: one for the Xbox 360 (as Hexic 2), one for Windows Phone 7 devices (as Hexic Rush). It was later remade as a free-to-play title for both Windows 8 and Windows Phone 8 devices (simply titled Hexic).

Hexic is a single-player puzzle game that involves a board filled with 90 connected hexagonal pieces of different colors, forming an imperfect square (with 8 pieces in odd columns and 10 pieces in even columns). The main objective is to use a cursor to rotate clusters of blocks in order to form groups of matching pieces (where one piece matches the color of two adjacent pieces), removing those pieces from the board.

Similar to Bejeweled, the playfield is gravity-based, in which pieces fall down from the top to close any gaps and new pieces arrive from the top of the playfield. This can cause chain reactions for additional points.

The player's cursor can be freely moved across the playfield and usually reside at the central point of any three pieces (including blank spaces in Survival Mode). Players can rotate the cursor, either clockwise or counter-clockwise, to move all pieces around it around one full rotation, stopping the rotation if it causes a match. Some special pieces allow the cursor to reside on the piece itself, allowing free rotation of all pieces around it (starflower) or pieces in a "Y" or inverse-"Y" formation (black pearl).

The game's main mode is Marathon Mode, which is an endless mode where players try to earn as many points as they can before a Bomb piece explodes. As the game progresses, players must endure additional challenges (including additional colors to manage and more-dangerous Bomb pieces). The game has seven Levels of difficulty, which is progressed by forming clusters.

In addition, the mode has a special endgame scenario that "completes" it, ending the game and granting a significant amount of bonus points. This is done by forming a cluster of special pieces known as Black Pearls.

An alternate version of Marathon mode, known as Timed Mode, adds an additional game timer for increased difficulty. The timer is replenished in small amounts by chaining clusters, and is fully replenished by clearing Levels. Forming Starflowers also fully replenishes the timer, in addition to increasing the maximum of the timer by 10 seconds.

An alternative game mode, known as Survival Mode, plays similarly to the SameGame genre by not replenishing the playfield with new pieces when matches are made. This challenges players to form clusters carefully in an attempt to completely clear the playfield.

The game is played in Levels. Once no more valid moves are available on the playfield, the current Level ends and all remaining pieces are "locked" while the remaining playfield is replenished with new pieces. Locked pieces cannot be rotated. The game ends when either all pieces on the playfield are locked, the player reaches past Level 50, or the player manages to completely clear the playfield.

Bombs, Starflowers, and Black Pearls are not available in this mode. Forming a Starflower will instead clear all pieces of the central color, in addition to the surrounding pieces, from the board.