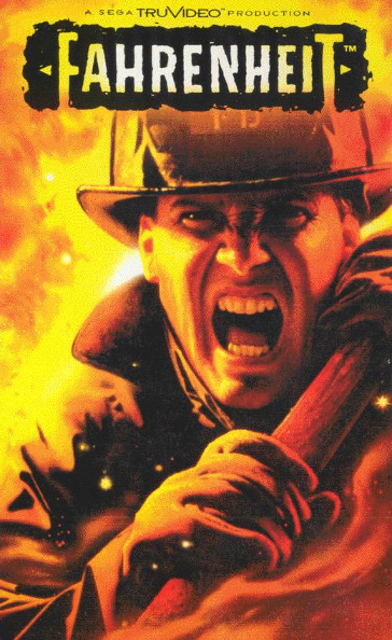 A FMV adventure game by Sega Studios and the only game released with both Sega CD and Sega 32X CD versions bundled together. As a rookie firefighter, players guide a team through burning buildings to rescue victims and dispose of hazards.

Fahrenheit (not to be confused with the 2005 game also known as Indigo Prophecy) is a full motion video adventure game developed by Sega Studios and published by Sega for the Sega CD (worldwide) and Sega 32X CD (exclusively in North America) in 1995.

As a rookie firefighter of the fictional Company 13 firehouse, players navigate a team through three crisis scenarios inside burning buildings to rescue victims and dispose of hazards. Players automatically wander through each building, where timed on-screen prompts allow them to make decisions (such as which direction to turn and whether to enter a room). They cannot linger for too long, as they have a limited supply of oxygen.

Unlike most FMV games for the system, which were developed by Digital Pictures, Fahrenheit was developed by Sega Studios. In the North American release, both SCD and 32X CD discs were bundled together in a single package (with both discs being required to run the 32X CD version).

The game was shot on location in Toronto, Ontario, Canada by Paragon Entertainment.