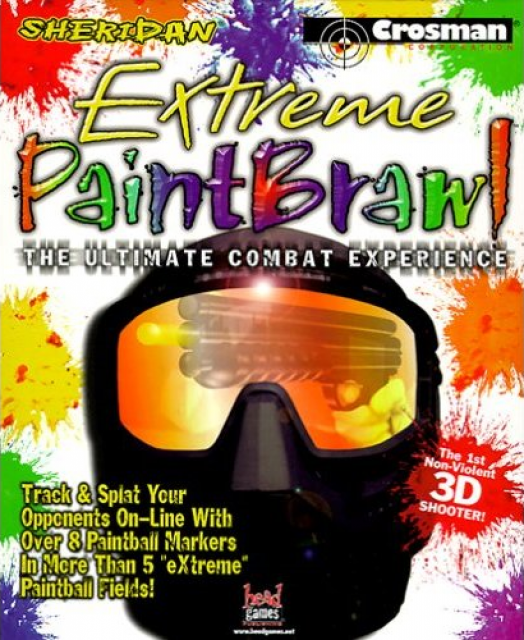 Advertised as "The 1st Non-Violent 3D Shooter", Extreme Paintbrawl is the first game in the first-person shooter genre to be based on the sport of paintball. It is cross-promotional with the Sheridan and Crosman brands of gear.

Extreme Paintbrawl is a first-person paintball game developed by Creative Carnage and released by HeadGames for the PC on October 20, 1998.

Running on the DOS-based Build engine (with the interface running on Windows, causing compatibility issues on later versions of Windows), Extreme Paintbrawl is the first first-person shooter based on the sport of paintball. The game is also (falsely) billed as "The 1st Non-Violent 3D Shooter".

Players manage their own paintball team in a season, using their winnings to manage weaponry, ammunition (both paintballs and CO2 canisters), and A.I. companions. The game includes five stages, including a desert and a space station. The game also supports both LAN and direct-dial multiplayer, using a traditional deathmatch mode.

The game is infamous as the developer was given only two weeks of development time, resulting in slapdash presentation and lackluster A.I. It is the first in HeadGames's Extreme series of games and received three sequels (none of which were developed by Creative Carnage).

Extreme Paintbrawl features five different arenas (ranging from the desert to outer space), that can only be played in one mode: 8-on-8 Capture the Flag. The player wins the game if they eliminate all the enemy A.I. or touch the enemy flag. If players are "tagged", they immediately control an ally A.I. and continue the game. If all eight of the player's team is eliminated, the player loses the game. The player can switch between different A.I. manually at any time (to access different weapons and gear).

Players cannot issue orders to ally bots, who often get stuck behind obstacles. Depending on the difficulty of the enemy team, they can sometimes act like aimbots, shooting the player from across the map with deadly range and accuracy.

The Windows interface features everything needed to set up a single-player campaign. Players can create/load campaigns, which consist of a pre-determined "tournament" against pre-determined teams. The interface also includes a "shop" where players must buy new guns, ammo, and CO2 canisters with money won from previous battles. Players can also swap A.I. players for new players with different stats, though its effect is minimal due to the incomplete A.I. coding.