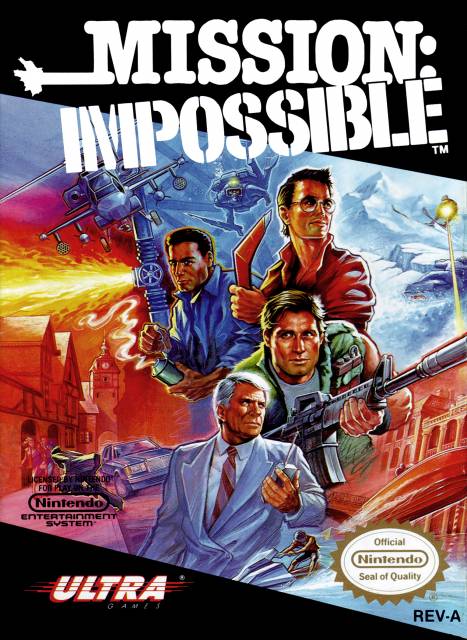 NES game from Konami based on the 1980's TV Series. It used the same game engine as Metal Gear.

Released in 1990, This Mission: Impossible game was loosely based off of the 1988 TV Series of the same name. A well-known scientist and an IMF operative, Shannon has been kidnapped by the terrorist group Sinistar 7. Now, the objective of the IMF Team is to chase down the kidnappers through various locations such as the Canals of Venice and the Switzerland Alps.

The game is played very similarly to Metal Gear for the NES, in that it implements both a top-down perspective and stealth elements. You can put on various masks to disguise yourself as other people, just like in the TV show, and you can also sneak around enemies, just like in Metal Gear. You can play as three characters from the TV show (Max, Grant, and Nicholas) whom each have special abilities and can be switched on-the-fly.