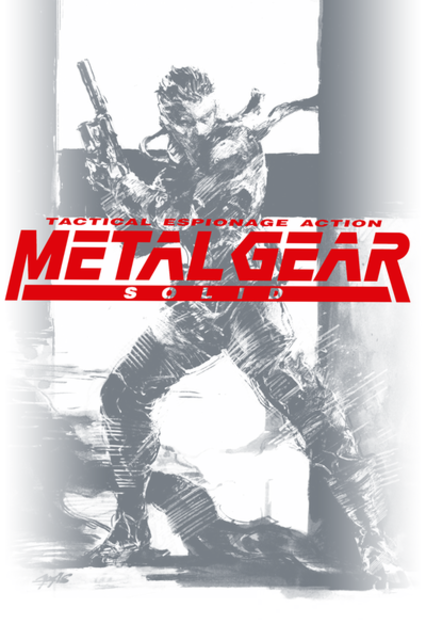 Metal Gear Solid, released in 1998, is a game developed and published by Konami Corporation. The game follows recent retiree Solid Snake in his return to active duty as he attempts to rescue DARPA Chief Donald Anderson and President of ArmsTech Kenneth Baker, both taken hostage by a terrorist group, in order to prevent the terrorists from launching a nuclear warhead.

Metal Gear Solid is a 3D espionage third-person action-adventure game developed by KCE Japan and published by Konami for the Sony PlayStation on October 21, 1998. It is the sequel to the Japanese-exclusive 1990 game Metal Gear 2: Solid Snake, and the first (and most prominent) installment of the Metal Gear Solid series of stealth action games.

The game is set in 2005, six years after a battle-hardened infiltrator of United States special forces unit FOXHOUND, codenamed "Solid Snake", infiltrated the military nation of Zanzibar Land, destroyed armored bi-pedal tank Metal Gear D (with its pilot, rogue FOXHOUND operative Gray Fox), and eliminated its leader, rogue FOXHOUND commander Big Boss. A secret nuclear weapon disposal facility (codenamed "Shadow Moses"), located on a remote island in Alaska's Fox Islands has been attacked by a terrorist splinter cell of FOXHOUND (led by the mysterious "Liquid Snake", who threatens the United States government with nuclear weapons if they do not provide the remains of Big Boss). Players reprise the role of Solid Snake, brought out of retirement (again) and dispatched by Colonel Roy Campbell of the U.S. government to neutralize the threat and rescue two key hostages (DARPA Chief Donald Anderson and ArmsTech President Kenneth Baker).

Despite the transition to 3D, the gameplay of Metal Gear Solid remains largely identical to that of its 2D predecessor Metal Gear 2: Solid Snake. Like its predecessor, Metal Gear Solid is a game which revolves around stealth, so Snake will spend most of his time avoiding enemy detection. Utilizing his ability to walk quietly, crawl, and press against walls, Snake can avoid attracting enemy attention. Snake can also take out enemies by grabbing them and knocking them out, or utilizing the variety of weapons in his arsenal to take them down. Unfortunately, making any sort of noise will alert other guards in Shadow Moses. If Snake is detected, the game will go into alert phase, bringing extra guards to the area as long as alert mode is active. In this mode, Snake must either fight or make flight, though most often, he must escape, as he is at a disadvantage. If Snake manages to sneak away, the game enters the evasion phase in which the guards will be actively searching for Snake, though they are not aware of his presence. If Snake can hide long enough, the game will go to normal sneaking mode. If Snake is found in evasion phase, the game will return to alert status. In both alert and evasion phases, Snake cannot use his Soliton radar.

Like in Metal Gear 2: Solid Snake, the Soliton radar becomes a handy tool for Snake, showing him enemy positions and their respective vision cones, therefore making it easier for him to avoid detection. In alert, evasion, and jamming phases, the radar becomes unusable. Snake has no radar in the harder difficulty levels of the game.

The player moves Snake around the environment using the D-pad or analog sticks, which are also used to look around when in first person mode. The first person mode is initiated by pressing the triangle button. To sneak around, Snake will often be crawling, initiated by pressing the X button. The X button also allows snake to crouch, which allows him to stay out of sight behind short boxes or other objects. Snake can press against walls as well, a technique often used for sneaking. By holding the X button and the shoot button, Snake can shoot while running. With his back to the wall, Snake can use the square button to knock on walls, which will attract enemy attention, possibly allowing Snake to sneak off in the other direction.

Snake's inventory is sorted into two menus on the left and right side of the screen. The right menu shows all weapons currently in Snake's inventory, while the left menu shows all other items Snake is carrying. The player uses the L2 button to bring up the item menu, and the R2 button to bring up the weapons. When the player brings up either menu, the game pauses, the inventory borders the screen, and it can be navigated with the D-pad. The L1 and R1 buttons are used from weapon and item quick changes. Snake is able to use many weapons throughout his mission, including pistols and claymores.

To access the codec, the player presses the select button. Often throughout the game, the codec will ring and a message will display, informing the player that they have received a call. Pressing the select button will answer the call. Whenever the player needs to save or consult any of the other characters, he can access the codec menu and then either choose from saved frequencies or search for a frequency manually. The codec is very important, both for saving and telling the story.

The circle and square buttons are used for combat. The square button is the weapon button, and when pressed, Snake will fire the equipped weapon. Without any weapons equipped, Snake can use the square button to throw or choke an enemy he has grabbed. The circle button will unleash Snake's devastating punch and kick combo. Snake will attack in the direction he is facing, which is altered using the D-pad or analog sticks.

One of the most memorable aspects of Metal Gear Solid is the unusual pieces of gameplay that go beyond stealth. The game introduces the torture event, which became a staple for later titles. While being tortured, the player has to press a button repeatedly to keep Snake alive (Also known as ''Button Mashing'' sequences). The game also has sequences borrowed from its predecessor Metal Gear 2: Solid Snake, including ones that take Snake's equipment away, require Snake to rappel down a building, and other off-beat sequences. Snake will find his mission is much more difficult then simply avoiding enemy detection.

There is one known difference between the US and Japanese versions of MGS1 on the PSX. In the Japanese version, if the codec frequency is dialled to 140.66 in the Snowfield, and two other locations, it plays a song. One song sounds like a laggy broken version of the theme from Metal Gear 2: Solid Snake. The player can access this song from the Snowfield outside of the Hangar when they first encounter Vulcan Raven.

At one moment during the game, players are required to physically look at the game's packaging. The back cover of the CD case contains a screenshot of the codec featuring Snake conversing with Meryl; this screenshot contains the frequency that the players must use in the game.

This particular moment was largely borrowed from the game's predecessor, Metal Gear 2: Solid Snake, which featured a similarly fourth-wall-breaking moment that also required the player to look at the game's packaging to find a new radio frequency.

Metal Gear Solid did a lot to break the fourth wall so that the player feels more immersed into the warped story-line.

This is seen all over the place throughout the game, especially in the Psycho Mantis boss fight. The Mantis fight really is a memorable experience as the designers used the PlayStation hardware in truly innovative ways to freak out gamers. During the beginning of the fight, Mantis will read the player's Memory Card for certain Konami games like Castlevania: Symphony of the Night, and comment on them. He will also comment on their saving habits if they don't save much. Sony had just released the Dual Shock controller and Metal Gear Solid used it in full force, most memorably when Mantis tells the player to, "Put your controller on the floor. Put it down as flat as you can." Then the controller would vibrate and wiggle around on the floor for a little bit. The fight is filled with a bunch of other little psych-outs, no pun intended, like pretending to change the channel on the TV to HIDEO 1, and making it impossible to aim at Mantis unless they switch their controller to "Port 2" so he can't read their mind.

This game has one of the most twisted story-lines of all time, only surpassed by the all-out wackiness of it's sequel. Liquid Snake and Solid Snake were genetically created in a lab from the Big Boss's DNA. Big Boss was revered as the perfect soldier back in the day, but he defects and starts to work to destroy the Patriots. Liquid and Solid Snake are both products of the Les Enfants Terribles project. According to Liquid, Solid Snake received all of Big Boss's dominant genes, and that he got stuck with the recessive genes. The genome soldiers that had been guarding the base had been genetically conditioned, using the research born from Les Enfants Terribles project. Liquid wishes to surpass their father's dream of a world of war, where soldiers can have a purpose.

Metal Gear Solid has two different endings. The most common ending is that when the player has finished fist-fighting with Liquid on top of the destroyed Metal Gear REX, Snake runs over to Meryl only to find her dead. Snake says, "I gave into my fear! I gave into my pain! I sold your life to save my own... I'm a loser. I'm not the hero you thought I was! I'm nothing!!!" Then Otacon shows up and talks about how "Death is not Defeat". Now Snake's little speech should have raised a red flag. He is referring directly to the torture chamber section of the game. If the player hits the "Select" button during either of the torture sequences, then they are doomed to the "Hal and Dave" ending. Surviving Ocelot's electric shock torture is no joke though, especially on the original PlayStation version (it is easier on The Twin Snakes).

Once a playthrough of Metal Gear Solid is complete, the player will be given a digital camera. They can use the camera on their next playthrough to take pictures. It's possible to also see "ghosts" of the Metal Gear Solid development team, which are scattered throughout the game. Most memorably, they can snap a picture of Hideo Kojima's ghost rising up from the steam of the guard's urine in the men's bathroom of the second base after the M1 Abrams tank battle.

An enhanced version of the game, titled Metal Gear Solid: Integral, was released in Japan on June 24, 1999. Along with adding features that were added to the international version of the game (such as difficulty settings, demo theater mode, English dubbing, and secret tuxedo outfit), this version adds a "Very Easy" difficulty (giving Snake a MP5 sub-machine gun with infinite ammo), new costumes for Meryl and Cyborg Ninja, an option to play the game completely in a first-person perspective, an option for alternate patrol routes for guards, hidden Codec frequencies, and a minigame for the Sony PocketStation. One of the key additions, a separate disc featuring over 300 "virtual reality" missions, was released separately for North America (as Metal Gear Solid: VR Missions) and Europe (as Metal Gear Solid: Special Missions) months later. This version of the game was later ported to the PC (as Metal Gear Solid) in North America and Europe by Digital Dialect on September 24, 2000.

In collaboration with Nintendo, the game was later remade for the GameCube as Metal Gear Solid: The Twin Snakes. Released on March 9, 2004 and developed by both Silicon Knights and Konami, the remake features an improved game engine (featuring improved graphics and gameplay mechanics from Metal Gear Solid 2: Sons of Liberty, such as first-person view and ledge-hanging), a rewritten script (by Japanese film director Ryuhei Kitamura), and a re-recorded dialogue (by most of the voice actors from the original game).