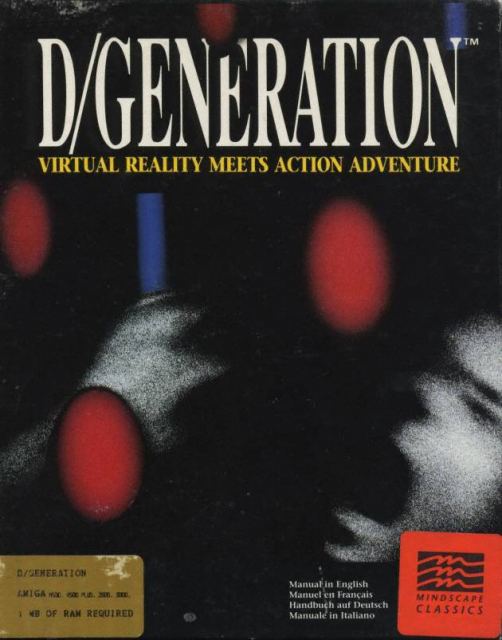 A simple package delivery takes a turn for the bizarre in D/Generation, a 1991 action puzzle game from Robert Cook and Mindscape, Inc.

Designed and created by Robert Cook, D/Generation is an isometric action-adventure puzzle game that was released by Mindscape in 1991 for the DOS, Amiga, and Atari ST platforms, and was later ported to the Amiga CD32 in 1993. Set in the year 2021, D/Generation takes place in a futuristic setting with elements of cyberpunk and dystopian fiction, and the story follows the actions of a simple courier making an urgent delivery who finds himself entangled in the illicit corporate world of bioweapon research gone horribly awry. With the courier as their player character, players must climb ten floors of the Genoq Biolabs research building in search of the scientist Jean-Paul Derrida, the recipient of the package they carry. Malfunctioning security systems and hostile organic weapons (called Neogens) will impede their progress, while traumatized Genoq employees may be able to help the courier piece together what happened at the building prior to the player's arrival.

Mere hours after receiving an urgent call in his Paris apartment, the protagonist of D/Generation, a nameless courier, arrives in Singapore via jet pack, touching down on the 80th floor of Genoq Biolabs' medical research facility with an important package for lead Genoq scientist Jean-Paul Derrida. As soon as he enters, however, the doors shut and seal themselves behind him. This, however, proves to be the least of his problems, as the receptionist soon informs him of Genoq's dire state. All lines of communication to the outside world have been severed, and furthermore the building's security systems and dangerous Neogens have run amok. Despite the perils within and the receptionist's adamant warnings, the courier chooses to proceed, perhaps believing that the item in his possession holds the key to stopping the chaos which grips Genoq.

Over the course of his journey into the building's upper reaches, the courier learns that Genoq had been steeped in the realm of illegal bioweapon development for some time, and that their medical research, which had long ago become unprofitable for them, was little more than a front for their more lucrative practice of creating and selling biological weapons called Neogens. Derrida had been brought on by the company to spearhead a project which would create the ultimate Neogen, and the fruit of his efforts, an artificial organism dubbed D/Generation, was ultimately the source of the disturbances within the building. Further complicating matters, he also learns that Genoq's corporate leaders have authorized an airstrike against the building in order to prevent details of their activities from going public.

Upon reaching the top floor, the courier discovers that it was not Derrida, but rather D/Generation that sent for him, and that the package he carried with him held a neurotransmitter which it needed in order to escape the building. Trapped within a hallucinatory realm conjured by his own creation, Derrida warns the courier that D/Generation must not be allowed to leave, as it was designed to be a genetically perfect killer that could blend in anywhere. Utilizing Derrida's advice, the courier is successful in luring D/Generation into a trap where it is killed by powerful microwaves. With moments to spare, he escapes the building, preventing the airstrike and saving the remaining employees trapped within the Genoq building.

The main gameplay of D/Generation consists of traversing interconnected rooms (called "scenes" within the game), accomplishing various tasks within them in order to ascend to the next level of the tower. Each level is comprised of multiple scenes, and each scene typically presents a particular challenge which must be overcome in order to progress. The game alternates between action-based and puzzle-based gameplay, with many scenes requiring some combination of both. On the action side of things, players are constantly harassed by hostile Neogens and security systems, which frequently require quick reflexes in order to defeat. Certain doors will only unlock when an area has been cleared of dangerous entities, and furthermore it is usually not feasible to rescue survivors (who grant additional lives) until an area has been completely cleared of enemies.

At the same time, there are cases where it is more advantageous to manipulate an enemy rather than killing it outright, which leads into the game's more cerebral leanings. Trackers can be used to kill other Trackers without firing a shot, for instance, and a Neogen that collides with a plasma barrier will permanently disable it. These are just two examples of instances in which the player is rewarded for thinking before they shoot. Most areas contain switches which can open and close doors, activate and deactivate security measures, or both, and success in many scenes comes down to manipulating these switches (as well as other devices, such as computer terminals and teleporters) in such a way as to provide safe passage for ones' self and any civilians. Timing and pattern recognition is also a crucial element throughout the game, since tougher puzzles can require that a series of deliberate actions be performed quickly.

The player's Laser sidearm is a good example of how D/Generation marries action and puzzle design elements. Its first and most obvious purpose is to kill the various hostile inhabitants of the Genoq building, however it's beams can activate switches, and will also ricochet, so it is usefully in many situations in which the player might wish to activate a switch from a distance, or cannot feasibly approach one due to a particular hazard. Even in combat situations when one is faced with forces that represent an immediate danger, it often behooves the player to be mindful of other objectives within the environment, as a stray volley could, for instance, kill a survivor, thus depriving the player of an additional life as well as potential exposition.

The arsenal of D/Generation, while not exceedingly deep, is decidedly tactical. Other than the Laser, which has unlimited uses, all items within the game are collected individually, with most being quite rare. With such limited quantities, this means that even using a single Grenade might have serious repercussions later on, like the inability to fight back against a deadly C/Generation. In general, it is a good idea to only use an item when presented the a situation which would be otherwise extremely difficult, if not impossible, to overcome.

The products of Genoq's covert organic weapons research, the lethal Neogens have overrun Genoq Biolabs, permeating all levels of the building through use of ventilation shafts. In addition to the threat posed by the constructs themselves, oftentimes additional Neogens will spawn through vents, doing so indefinitely until said vents are closed by the player. Certain types seem mostly interested in the player (C/Generation), while others show no reservations in attacking survivors when given the opportunity (A/Generation).

Subverted by D/Generation's influence, the protective measures of Genoq Biolabs are a constant hindrance to the player. They at times can be overcome through sheer brute force, such as when using a Bomb to blow a path through a secured door, though more often than not players must simply be mindful of the threat they pose if they wish to survive their ordeal. In particular, players should always be on the lookout for keys, as they are the main means of progression on most floors.