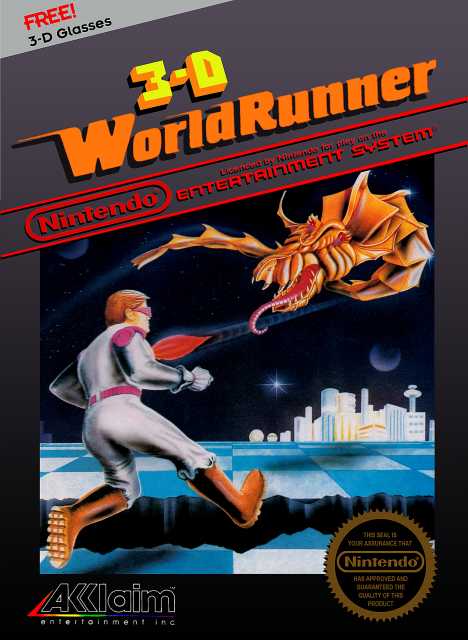 This Acclaim published NES game was the first Square game to reach North America. The game was developed by both Hironobu Sakaguchi and Nobuo Uematsu.

3-D WorldRunner is a 1987 third-person, action-shooter-platformer, developed by Square. The player assumes the role of Worldrunner, also known as Jack, and must save several planets from strange alien creatures, led by the villian Grax. The game consists of 8 worlds, each divided into separate quadrants. The player must navigate through the level and defeat the endboss before a timer at the bottom of the screen runs out. Worldrunner is not controlled directly by the player, but his movement speed is changed by use of the directional pad. He can also jump and fire missiles, which must be obtained by the player. It was notable for being one of the first pseudo-3D platformers.

One of the game's most unique features was the "3-D mode", which was also featured in Square's Rad Racer for the NES. The Japanese Famicom version utilized the Famicom 3D System, which used LCD shutter glasses to produce a true stereoscopic 3D effect. In the North American NES version, however, when the 3-D mode was activated, the graphics became anaglyph images; when viewed through the supplied red and cyan filtered anaglyph glasses, a Stereoscopic 3-D effect was achieved. This has made finding a complete version of the game quite difficult for collectors, as the 3-D glasses included are often missing. This same technology was later used by Square in both JJ, the sequel to 3-D Worldrunner, and Rad Racer.

The game was designed by Hironobu Sakaguchi and programmed by Nasir Gebelli, with chiptune music composed by Nobuo Uematsu. This same team would go on to develop Final Fantasy for Square later that same year.