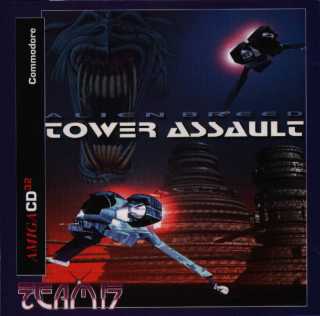 Sequel to the first Alien Breed top down shooter

More top down action from Team 17 released in 1994. Tower Assault is even harder and more frustrating than Alien Breed 1 & 2.  The designer's mission seems to be to inflict as much pain as possible onto the player. But the rewards are plenty. Beautiful graphics, and level-design - multiple locations - military tower, storage area, science, prison, civilisation tower etc etc. Multiple ways to complete the game. Now you can fire and move at the same time, and enjoy some non-linear exploration. Dont try this alone, it would be suicide.

Team 17 decided to come up with the idea of the base divided on sections which differentiate by the type of aliens they host. The gameplay is much more adventurous because you see your route progress and facts and actions which follows your activity. The game is not very challenging until you reach military tower in which even the best achievement of IPC engineers can hardly get rid of the hordes of attacking aliens. Excellent particullary with astonishing graphics and sounds! The AGA version gets the best out of the 256 colors.