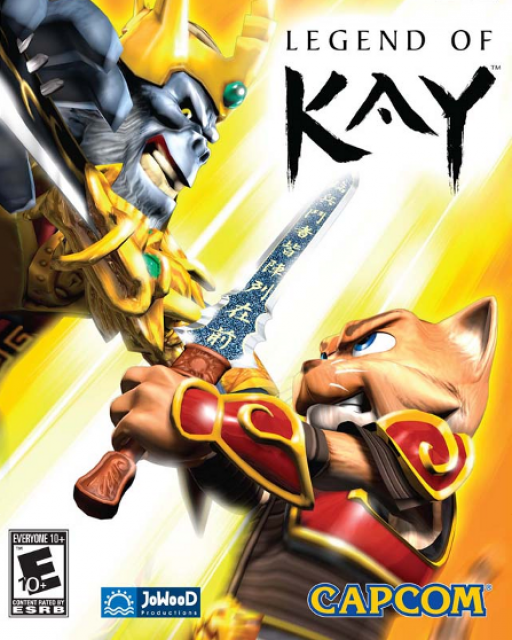 A Zelda-like adventure in which an anthropomorphic cat named Kay must defend his peaceful home from a vicious invading army.
PlayStation 2 Nintendo DS PlayStation Network (PS3)

On the peaceful medieval China-themed island of Yenching, the frogs, rabbits, pandas, and cats once lived in harmony, following a benevolent philosophy and religion known as The Way. In more recent years, however, the people have strayed from The Way and grown complacent. Taking advantage of this, a massive army of gorillas and rats, calling themselves the Din, have invaded, gripping the entire island in a stranglehold of tyranny, and attempting to crush the spirits of the locals into servitude under Minister Shun, leader of the gorillas, and High Alchemist Tak, leader of the rats.

The story begins with Kay, a young cat who is disinterested in history or The Way, and only cares about warriors and martial strength, idolizing the Master who is slowly teaching him the ways of combat, and who was once the mightiest swordsman in all of Yenching... though forty years later, he's now something of a drunken has-been. Kay's dismissal of his friend Su Ling's concerns about the gorillas' control over their village infuriates her, and Su Ling leaves the village in hopes of finding someone to help her stand up to the Din. Kay initially believes the gorillas deserved to take control of the island because they're "strong, and good fighters", but as he spends the day in his village, doing odd jobs for the townsfolk and learning the ways of combat from the Master, he realizes how they control everything and make life harder for his people. The final straw comes when the gorillas demand that the Master shut down his martial arts school, claiming that it breeds dissent against the gorillas and rats, and saying that soon every village in Yenching will have a Din school in them instead. To Kay's frustration, the Master passively agrees to shut down the school, and that night, Kay steals a legendary sword from the Master's house as he sleeps, and escapes the village.

Kay proceeds to go on a journey across Yenching, visiting the rabbits who dwell in the forest in their massive Haretree, the frogs whose home in Frog City sits in the middle of a boggy swamp, and the pandas who are the most oppressed in the Forsaken City, where the Din seek to unlock the secrets of the past. Along the way, he fights legions of rats, gorillas, and their other allies, such as crocodiles, turtles, and bears, explores hidden places for treasure - such as upgraded swords, or new weapons like claws and hammers - takes down titanic bosses, helps people in need, and proves himself a budding hero of the people. At every step of his journey, Kay is helped out by an elderly cat Shopkeeper who sells useful items and fortune cookies containing the always-helpful "Tip of the Day", and whose wagon shop always seems to be one step ahead of Kay, no matter where he goes. Meanwhile, Tak and Shun are building a massive machine at the heart of the volcanic island of Waa-Lo nearby, a machine which will make them immortal once they use it. However, their mutual distrust causes them both to have their rat and gorilla engineers, respectively, sabotage the machine so that their counterpart cannot use it, unaware that they are also being betrayed.

After arriving in the Forsaken City, Kay meets up with Avalanche, the panda resistance, and is surprised to find that their leader is Su Ling. She sends him on simple missions within the city, one of which leads him to chase off Minister Shun's incredibly loyal personal bodyguard, a hulking gorilla that Kay once respected for his battle scars. Su Ling then sends Kay to the Ancient Dungeon where the last Cat Emperor is buried, where Kay retrieves an ancient nautical chart that will show them the only safe path to Waa-Lo. After a rough sea voyage aboard the panda-manufactured ship Mi-Noh, one that is interrupted by a sea serpent, they arrive at the island, and Kay wastes no time in fighting his way through the last remaining guards, striking down Tak after the High Alchemist fails to make himself immortal with the machine. Proceeding to the very heart of Waa-Lo, Kay confronts Shun, who is enraged when he loses the initial swordfight against Kay. Shun makes his own attempt to activate the machine, and instead of making him immortal, it turns him into a heavily muscular monster, who Kay battles atop the towering machine at the core of the volcano. When Kay defeats Shun a second time, the Minister's bodyguard comes to his dying king's aid, and the machine re-activates and merges Shun and his bodyguard into a single, even more monstrous gorilla-creature. Despite its power, Kay defeats this new monster as well, and as it dies, the volcano on Waa-Lo finally begins to erupt.

Kay is rescued from certain death by Su Ling, swooping down on a stolen gorilla hot air balloon, and the two of them, plus the Avalanche pandas, safely retreat back to the Mi-Noh, where Kay and Su Ling express their growing feelings for each other by holding hands as the sun rises. The Shopkeeper comes out of the ship's hold and gives Kay a beautiful jewelled necklace as a gift to Su Ling, free of charge, since he has saved Yenching from tyranny, and Kay reveals that he has worked out that the Shopkeeper was actually the Master all along. The three cats celebrate Kay's victory and the dawn of a new freedom, and laugh happily as the ship brings them home.