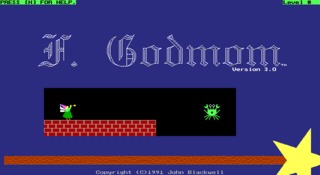 A DOS-based puzzle platformer in which you play a fairy godmother.

F.Godmom is an action puzzle game developed and published by Soggybread Software for PC (DOS).

Players do not have the ability to jump in the game, but instead the world must be explored by using a series of ladders in each level. The defining mechanic of the game is the ability to transform objects and enemies in the world into whatever object the wand is currently set to.