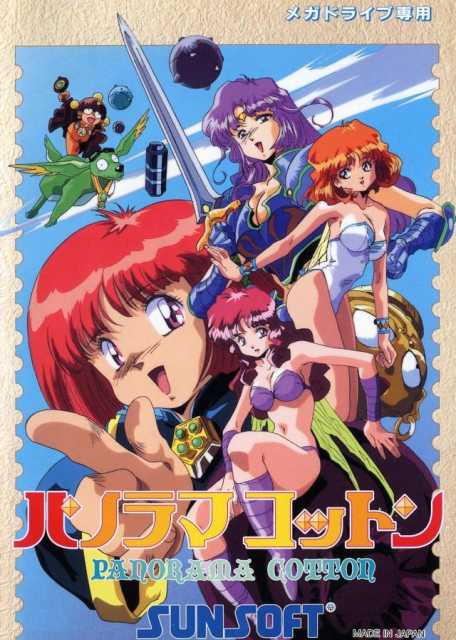 Panorama Cotton, part of the shoot 'em up (shmup) Cotton series, is a pseudo-3D shooter released in Japan on the Sega Megadrive (known as the Genesis within the United States.)

Panorama Cotton is a rail shooter released by Success Corp. in 1994 for the SEGA Genesis and is the 3rd game in the series, but the first to be released on a SEGA console. Unlike the main iterations in the Cotton series (which are Horizontal SHMUPS), Panorama Cotton is a rail shooter in the vein of games like Space Harrier. It's notable for being one of the 'Big 5' Genesis shooters to never be released outside of Japan, but is also regarded as one of the most graphically impressive games release for SEGA's 16 bit machine - the background scaling and sheer speed of the gameplay are quite unlike anything else available for the system. Panorama Cotton received a spiritual sequel in 2000 when Success Corp. released Rainbow Cotton for the SEGA Dreamcast.

Panorama Cotton had a relatively low print (said to be only about 1000 copies shipped) and as a result it is one of the rarest and most sought after Mega Drive games and usually sells for $200 or more in auctions. Some copies came with a decorated tea cup and usually fetch higher prices.

In 2021, it was released in North America for the first time for PS4, PS5 and Nintendo Switch.