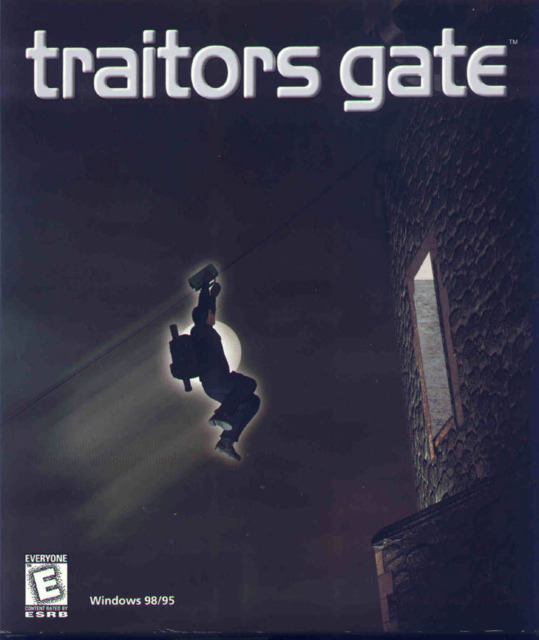 Infiltrate the Tower of London and steal the Crown Jewels utilizing a variety of tools and gadgets in this first person adventure.

Traitors Gate is a point-and-click adventure game that most resembles games like Myst, where players must interact with environments to find objects and solve puzzles in order to progress. It came on 4 CDs and often required the player to swap them out for the next part of the game. The game really isn't noteworthy for anything, and very few people seem to remember it even existed, lost in the flood of similar games in the late 1990s and early 2000s.

Traitors Gate puts players in the shoes of Raven, an operative of the United States Pentagon. A former operative of the Pentagon, Major D.G. Anderson, has defected along with several classified files. Included in these files are detailed blueprints of how to recover great treasures of various countries, most notably the British Crown Jewels which are protected within the Tower of London. Instead of harming foreign relations between the U.S. and Britain by admitting to such a thing, the Pentagon decides to send the operative codenamed Raven in covertly to break into the Tower of London and replace the Crown Jewels with fakes before Anderson can get there, ensuring that the CIA can track Anderson and bring him in. He has twelve hours to pull off the greatest heist in history - or risk the Jewels forever falling into the wrong hands.

Players move through a series of environments and manipulate the environment using items given to the player at the start of the game and those found within the environments later on (shown as two separate inventories in-game). The game is mostly linear, but a few spots, particularly the sewers found under the Tower, have several branching paths to take. It falls to the player to figure out where to go and how to overcome obstacles such as locked doors or patrolling guards. The ultimate goal is to find the Crown Jewels, swap them with the replicas, and escape to the titular Traitors' Gate without anyone ever knowing you were there, all in a time limit of twelve hours.

Raven is given a PDA to assist him in this gargantuan task. The PDA has a variety of functions: e-mail updating the player of certain objectives, a timer letting him or her know how much time remains in the game, a note-taking section for remembering important combinations or passwords, a GPS/map feature complete with compass, a camera which can be used to send information to your superiors for more information or just to remember things that have been seen, and general information about the various places and things involved in the game such as the Tower of London and the Crown Jewels. With certain attachments, the PDA can also function as a door decoder, video surveillance monitor and video looping tool, and audio amplifier.

Along with the PDA, players start with a variety of other gadgets. Soon after starting the game, a backpack can be found with even more toys. The full list of tools includes a crossbow for taking out guards or manipulating the environment, a gas cylinder full of knockout gas, a gas mask, a grappling hook attachment for the crossbow, gum, a key-turning device used to remotely turn keys on a timer, a small mine to break through areas, a multi-tool with screwdriver and wire cutter attachments, a lockpick, replicas of the Crown Jewels with tracking devices inside, a rope-lift for ascending, and a key to access the sewers under the Tower of London. Players also receive the aforementioned attachments for their PDA.