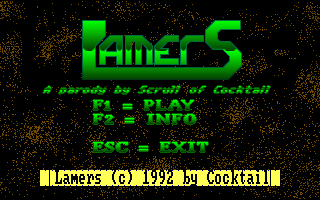 Lamers is a parody of Lemmings where, instead of rescuing the creatures, the player is tasked with gunning them down before they reach the exit.

Four weapons are provided throughout the game: a machine gun with a high rate of fire but limited ammo, bombs with a time delay fuse for a large area of effect, landmines to destroy anyone crossing their path and a pistol for picking off the Lamers one by one.

The Lamers themselves do little more than walk left or right throughout the level trying to get to their destination, a computer. They have the ability to build bridges to traverse gaps, but often this just results in getting them stuck on geometry. During the last level of the game, however, the Lamers decide to fight back, shooting at the screen until the player is defeated. In order to proceed and beat the game, all of the Lamers need to be killed before the screen turns completely red.