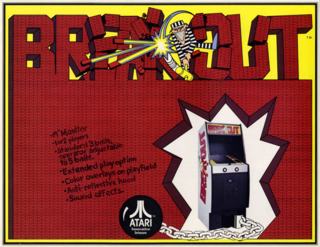 Breakout is an arcade game, originally created by Atari in 1976, and has seen numerous remakes and re-releases in the last three decades.

The idea for Breakout originated circa 1975 when Atari founder Nolan Bushnell decided that they should release a version of the hit game Pong that could be played by a single player, as the first Pong featured no programmed AI.

Atari assembled a team that included Pong designer Al Alcorn and future Apple co-founders Steve Jobs and Steve Wozniak. The arcade cabinet was released in May 1976, the game was in black and white but featured colored plastic over the bricks.

The game would go on to be ported to several platforms, including the Atari 2600 and Apple II.

In Breakout, playerscontrol a paddle at the bottom of the screen, and the point is to hit a ball to the top of screen to break the bricks that are set in six different colored lines at the top. When players hit a brick in the top three colors the speed of the ball greatly increases, and when players hit the top of the screen past the bricks the paddle gets smaller. Both of these features combine to make the game much harder.

While the game was a moderate success upon release, it was largely forgotten by the early 1980s. In 1986, however, Taito revived the Breakout style of gameplay with Arkanoid, which became a considerable success, launching its own Arkanoid franchise and inspiring numerous clones based on the same Breakout formula.