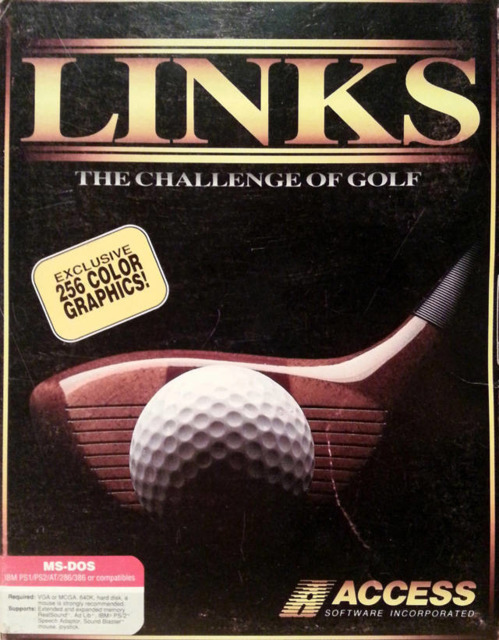 Links: The Challenge of Golf

The first in a series of PC-based golf simulation games developed by Access, featuring realistic digitized sprites (for both golfers and environmental objects), a recreation of a real-life golf course (with support for additional courses), and a unique "Swing Gauge".

Links: The Challenge of Golf is a behind-the-back golf simulation game developed and published by Access for the PC (running MS-DOS) on May 4, 1990.

The successor to the Leader Board series of golf games, Links brings a more realistic golfing experience with digitized sprites for both golfers and environmental objects (similar to the New 3D Golf Simulation series). It also utilizes the series' signature "Swing Gauge", which controls both power and accuracy in two button presses.

The base version of the game includes a recreation of one course: the southern 18 holes of the Torrey Pines Golf Course in the U.S. city of San Diego, California. Players can install additional expansion courses (each sold separately as part of the "Links Championship Course" series). Players can also practice in a bonus "practice area" that includes both a driving range and a chipping/putting green.

Links was also ported to the Amiga (both original and ECS variants) in 1992 (with an European release by U.S. Gold), for the Tandy Memorex VIS in 1992, and for the Sega CD in 1994 (ported by Papyrus and published exclusively in North America by Virgin Interactive). The SCD version features full-motion video for aerial "fly bys".

The original game received numerous updated sequels before the studio's demise in 2003, including its direct update (Links 386 Pro), the first three entries of the Microsoft Golf series, and annual releases from 1996-2003. Most expansion courses sold after the release of Links 386 Pro are backwards-compatible.