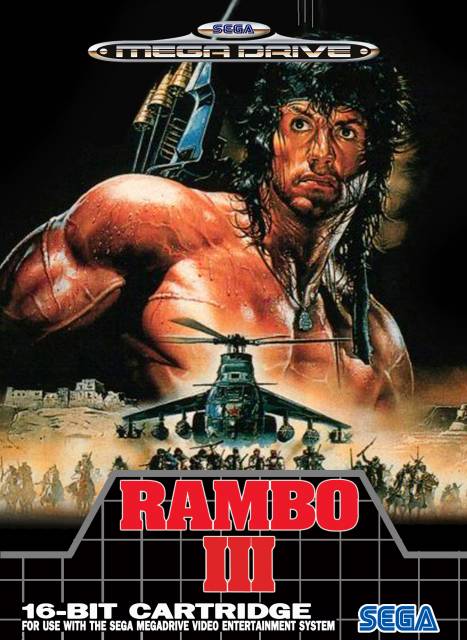 Recreating the events of the movie of the same title, commando John Rambo must rescue his mentor and friend, Colonel Trautman, from the Soviet forces occupying Afghanistan.

Based on the 1989 movie of the same name, the player must use John Rambo's finely honed martial skills to rescue his friend, mentor, and former commander Colonel Trautman from the Soviet forces during their occupation of Afghanistan. Played from a top-down perspective in-level, with over-the-shoulder perspective boss fights between levels, Rambo uses his AK-47, blocks of C-4, explosive tipped arrows and, of course, his enormous K-BAR knife to fight his way in and out of the 6 levels in the game.

The game also had Rambo accomplishing a variety of mission objectives, including rescuing prisoners, taking out Soviet supplies, and shooting down HIND helicopters with explosive arrows. Some game mechanics included item refills though the use of the combat knife - enemies dispatched with the knife usually leave behind items. This exposed Rambo to additional danger however, since the game employed a one-hit-wonder health system, forcing the player to weigh the risks and rewards of going after those items.

The Sega Master System version of Rambo III is a light-gun game, rather than the top-down shooter found on other systems. Though more similar mechanically to the "behind-the-shoulder" TPS Arcade version, very little of the game appears to have anything to do with the plot of Rambo III, as the generic enemies look nothing like Soviet soldiers. It's possible the game was at one point a generic light gun game and had the Rambo III license bolted onto it late during its development.