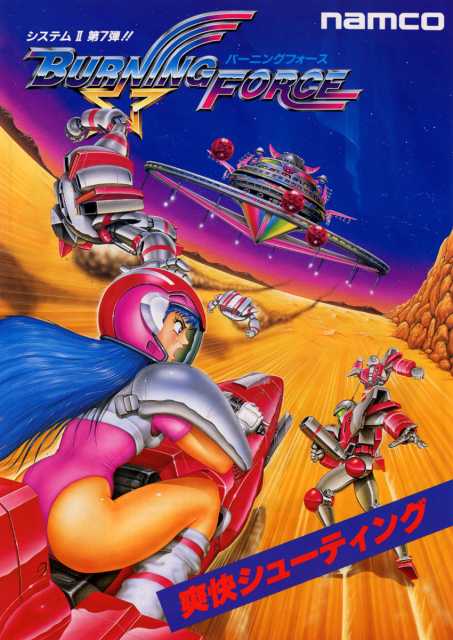 Burning Force is a pseudo-3D shoot 'em up developed by Namco and released in Arcades in 1989 and later ported to the Sega Genesis in 1990 in Japan, Europe and the United States. The game was released for Virtual Console in 2009. The game stars Hiromi Tengenji, a 21 year old spade-cadet who is going for her final exam at Earth Space Academy. Hiromi later appeared in the game Namco x Capcom alongside Toby Masuyo from Baraduke.

Burning Force takes place across six levels or 'days', with each day being split up into four stages. The first two stages put the player into a hoverbike, which can move vertically and speed up or down. Unlike other shoot 'em ups, simply colliding with the enemy does not destroy the player's ship, but knocks them back, leaving them more vulnerable to enemy fire. At the end of the second stage, the player moves into a dropship and receives an upgrade to their bike which allows flight, as well as being briefed on the boss in the next stage, being shown the boss's weakpoints. The third stage allows the player to move around the screen freely, similar to Space Harrier. At the end of the stage, they fight a boss. The fourth stage is a bonus round, where the player can fly through floating balls to collect additional points which is a good place to collect 1-Ups. In the final day, the game moves into a space-shooter, giving the player access to flight across all 4 stages.

The soundtrack to Burning Force was composed by Yoshinori Kawamoto. It was released in Japan by Victor Musical Industries in 1990. In 2010, it was released on iTunes as part of the 'Namco Sounds' series and is available here.