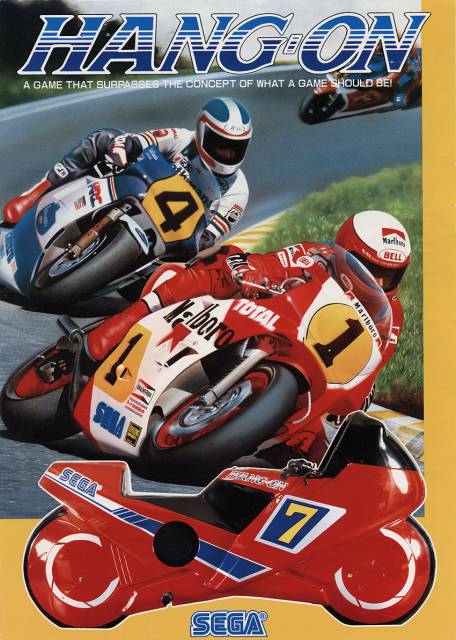 An arcade motorcycle racing game that broke new ground when it released in 1985, revolutionizing and revitalizing the arcade industry, with its motion-controlled cabinet and pseudo-3D "Super Scaler" graphics. A port was offered as a pack-in with the Sega Master System console for a period of time.

Hang-On is a motorcycle racing game, released for arcades in July 1985. It was developed by Sega's Japanese AM2 studio and designed by Yu Suzuki, and it was their first major hit. It is the world's first full-body-experience video game (according to GameCenter CX, Season 2, Episode 13). In the game, the player controls a motorcycle against time and other computer-controlled bikes. It was one of the first arcade games to use true 16-bit graphics and Sega's "Super Scaler" technology that allowed pseudo-3D sprite-scaling at high frame rates.

The game ran on the Sega Hang-On arcade system board, which later ran Space Harrier and Enduro Racer. It was subsequently ported to the Sega Master System console as a pack-in, built-in game, released for Japan on October 20, 1985, and for Europe in 1985. It was also ported to the MSX home computer by Pony Canyon in 1986, exclusively for Japan. A version called Hang-On II was also released for the Sega SG-1000 console (also compatible with the Sega SC-3000 computer) in 1985, also exclusive to Japan.

The title "Hang-On" was inspired by a turning technique of the same name used by motorbike racers that series creator Yu Suzuki found in a Japanese motorcycle magazine. It is a technique where the biker is turning and has to "hang on" to the bike while the bike is leaning, Suzuki later learned that the technique in English is referred to as "hang off"; nevertheless, the name "Hang-On" stuck (according to GameCenter CX, Episode 10, 2003).

The arcade game was a popular Grand Prix style rear-view motorbike racer. It was regarded as the first motorbike simulator for its realism at the time, in both the handling of the player's motorbike and the artificial intelligence of the computer-controlled motorcyclists. It was also the first full-body-experience video game, as it was the first video game to use a motion-controlled hydraulic cabinet, along with force feedback technology, which revolutionized and revitalized the arcade game industry. It was also one of the first arcade games to use 16-bit pseudo-3D graphics, introducing Sega's "Super Scaler" technology, which allowed rapid sprite-scaling at high frame rates. In addition, the Yamaha YM2203 sound chip also introduced the use of digitized drums to chiptune music.

The pseudo-3D sprite/tile scaling was handled in a similar manner to textures in later texture-mapped polygonal 3D games of the 1990s. Yu Suzuki stated in an interview that his "designs were always 3D from the beginning. All the calculations in the system were 3D, even from Hang-On. I calculated the position, scale, and zoom rate in 3D and converted it backwards to 2D. So I was always thinking in 3D." The original arcade version was controlled using a cabinet resembling a motorbike, which the player moved with their body. This began the "Taikan" trend, the use of motion-controlled arcade cabinets (including hydraulic motion cabinets) in many arcade games of the late 1980s, two decades before motion controls became popular on video game consoles.

It was followed by a sequel, Super Hang-On, released in 1987. Hang-On paved the way for Sega's subsequent "Super Scaler" arcade hits, such as Space Harrier, OutRun, After Burner, Thunder Blade and Galaxy Force.

Description taken from the back cover of the US release:

Hang On is the 3-D motorcycle race game that's taken the arcades by storm. Race through grasslands, seasides, valleys, nighttime cityscapes and, of course, motorcycle racecourses. This game is so fast it even gives you special techniques like Hang-on and Countersteering for taking the corners.

Upon release, the arcade game was critically acclaimed. It was reviewed by Clare Edgeley in the December 1985 issue of Computer and Video Games (page 89). She stated that Hang-On "is the most realistic racing game to hit the arcades for a long while." She described it as a "fantastic" and "thrilling ride" on a motor bike "you have to sit on" that is "life size" with "the throttle and brake" where "they would be on a real machine." She criticized the "expensive" price of 50 pence per play (equivalent to £1.32 or $2.09 in 2015) but noted, "with practice you will be able to stretch it for miles." She stated "the most unique feature is the act of cornering" where "you have to physically lean the bike over" and the "bike on screen follows suit" while not doing so has the bike "career straight off the track" but noted it requires "a bit of muscle power". She concluded that it combines "superb graphics" with "the physical act of riding a bike" and is "great."

The arcade game also received a positive review in the February 1987 issue of Sinclair User, where it was reviewed again by Clare Edgeley, retrospectively. She stated that Hang-On "launched on an unsuspecting world" with a "totally new dimension of gaming", a "motor cycle which you could sit on and tilt from side to side to corner the bends." She described this as "Amazing" and "Such a simple idea" that she was "surprised someone didn't come up with it earlier." She noted that, when "cornering, the angle you need to tilt the bike corresponds to your speed", where "the faster you take a bend, the greater the angle you have to tilt the bike, and then remember to bring it back to the level for the straight", and the need to "dodge hazards and other bikers" by tilting "the bike slightly" to "slide out in that direction." She also noted that, since its release, Sega "seems to have cornered the market" for "bike simulations" with Hang-On and Enduro Racer.

The Master System port was also well received, with an average aggregate score of 80% at Sega Retro based on five reviews. The September 1987 issue of Computer and Video Games (page 77) gave the Master System version ratings of 8 for graphics and 8 for sound, with an overall score of 9 out of 10 for playability. The reviewer Paul described it as "head to head, high speed action" that "comes free when you" buy "the Sega System." He noted each "course is four kilometres long" and "the distance remaining is displayed at the top right-hand corner of the screen." He stated he was "wrong" to think it "would just be the bike version of World Grand Prix" and concluded, "Speed merchants who fancy a head to head challenge against the clock, go for Hang On."

The January 1992 issue of Sega Pro (page 47) gave the Master System version a generally positive retrospective review, giving it a 78% score. The praised the "fast moving action" where "you race around tracks trying to knock up record times." They criticized it, however, for lacking "some of the nice touches of the Mega Drive version," but concluded that Hang-On for the Master System is "still a damn fine racing game" and "very playable."