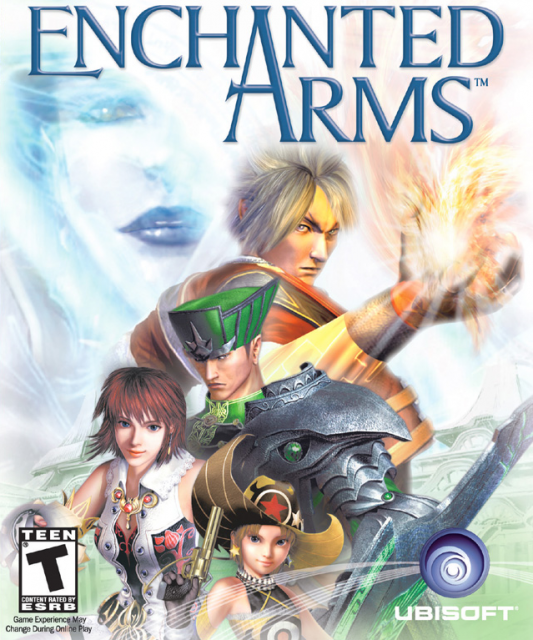 This RPG focuses on a band of warriors attempting to stop the Queen of Ice from resurrecting ancient golems which could destroy the world. The game is similar in formula to Final Fantasy titles and uses randomly triggered encounters.
Xbox 360 PlayStation 3

Enchanted Arms is a JRPG containing both Sci-Fi and Fantasy themes that was developed by FromSoftware with the help of other developers for more specific jobs such as character art. The game was published by FromSoftware in Japan and was released on January 12th, 2006 and published by Ubisoft for its release on August 29th, 2006 in North America and September 8th, 2006 release in Europe for the Xbox 360 platform.

The game was later released on the PlayStation 3 the following year with a January 25th, 2007 Japanese release; a March 23rd, 2007 European release and finally an April 3rd, 2007 North American release.

Enchanted Arms uses random triggered encounters and turn-based combat to present enemies to the player. Players control all four party members. The battles take place on a 24x24 grid, each side containing a 12x12 grid. Characters can move a certain number of squares each turn depending on their stats. Attacks are represented through squares of the grid being highlighted red to show the player the range of the attack, similarly support spells highlight squares green. Moves are divided into three categories; direct attacks which require the player to be standing in a square adjacent to the enemy, ranged attacks which require the player to have an enemy within the highlighted area and support which aid teammates. During the battle players can build their EX gauge, which works similarly to a limit break in Final Fantasy, however if more than one character has their EX gauge full then combos can be achieved. When a Character is knocked out they must be revived within 3 turns, when all characters are knocked out the player is presented with a game over screen.

Golems can also be used as party members. These are similar to pokemon in that the player can obtain Golem essence through his fights with sub bosses or in chests placed around the world then create a Golem by fusing it with materials. Golems are different to human characters as they cannot learn new skills, forcing the player to be strategic when it comes to selecting which Golem to use in a battle or whether to use one at all.

Some of the Golems are characters from other FromSoftware games including Raikoh from the Otogi series and Michael Wilson in the Metal Wolf from Metal Wolf Chaos. There are also some Mechs from Armored Core and Murakumo: Renegade Mech Pursuit. On the PS3 version some of these Golems were removed becasue they were characters that had appeared exclusively in Xbox Games and an additional 30 were added to make up for the loss.

The game opens following three friends; Toya, Atsuma and Makoto at the Enchanters University in Yokohama City. During a citywide festival natural disasters strike and the group are forced to rush back to the university to help any stranded students, during which they stumble into an underground laboratory and manage to awaken a Devil Golem, The Queen of Ice. The Queen subsequently attacks the party, knocking them out and utterly destroys the city of Yokohama. Atsuma then wakes up in London City and begins his quest to reunite with Toya and stop the Ice Queen. During his journey he meets up with Karin, Raigar and Yuki.