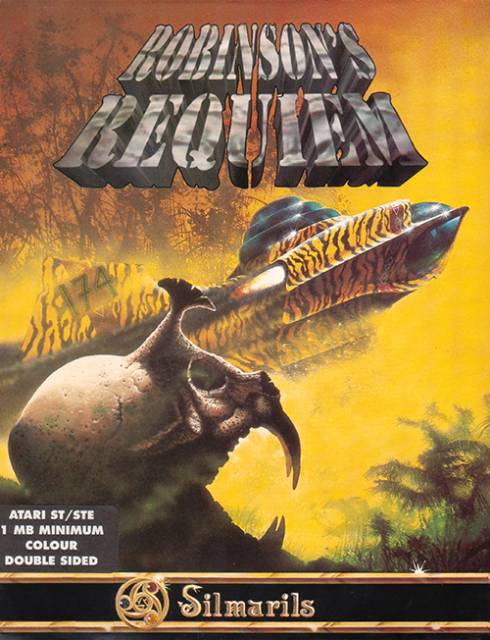 Set in 2165, Robinson's Requiem is a survival adventure game with a steep learning curve. Players must forage resources and fight off disease to stay alive.

Robinson's Requiem essentially dumps the player onto the mysterious planet Zarathustra, with literally nothing but their clothing. Survival is the player's primary goal. Collecting the equipment lost during the crash is a secondary, but important goal, as all the equipment is needed to beat the game. An overall plot is also uncovered, with specific objectives received telepathically through dreams.

To survive, the player must make use of their environment. Using a hollow gourd on a water source fills the gourd with drinkable water. Using a survival knife on a tree creates branches which can be used to start a fire. These resources will be used to keep the player healthy, with a wide variety of maladies facing the unprepared explorer. The game tracks everything from the player's body temperature to their blood pressure, which all have expected consequences. If the player sleeps out in the cold, they have a chance to develop a flu. If they drink un-boiled water, they can get sick. The player can faint, go into shock, or require tranquilizers to calm shot nerves. They can be in so much pain that they cannot sleep.

External damage is similarly modeled, and mended with sutures, shots, and disinfectants. Players can break limbs by falling on the environment, slowing their movement speed and affecting their vitals. Untreated lacerations can develop infections. Famously, crows can peck out the player character's eyes, and limbs can become so gangrenous that they require amputation - which the player can do with a tourniquet and a sharp enough knife. Ouch.

The game was re-released on GOG.com. The Jaguar CD version was canceled during development due to the imminent demise of the system, but retro game specialists Songbird Productions restored and published the game in 2011.

In the future, a fascist global government sends handfuls of trained citizens to report on unexplored worlds. Called "Robinsons" (after Robinson Crusoe), these explorers arrive with minimal equipment, and live off the land for five years. When they retire, they are welcomed back to Earth as heroes with a grand celebration called a Robinson's Requiem.

The player controls "Trepliev 1," a veteran Robinson on his last mission before his Requiem. Upon approaching the planet Zarathustra, magnetic shields around the planet force his ship to crash. He quickly learns that Zarathustra is set up as the "last stop" for all Robinsons, whom the government never intended to make it back to Earth. Surrounded by wild animals, untamed nature, and other surviving Robinsons in various mental states, Trepliev 1 must fight to live long enough to try and find a way off the planet.